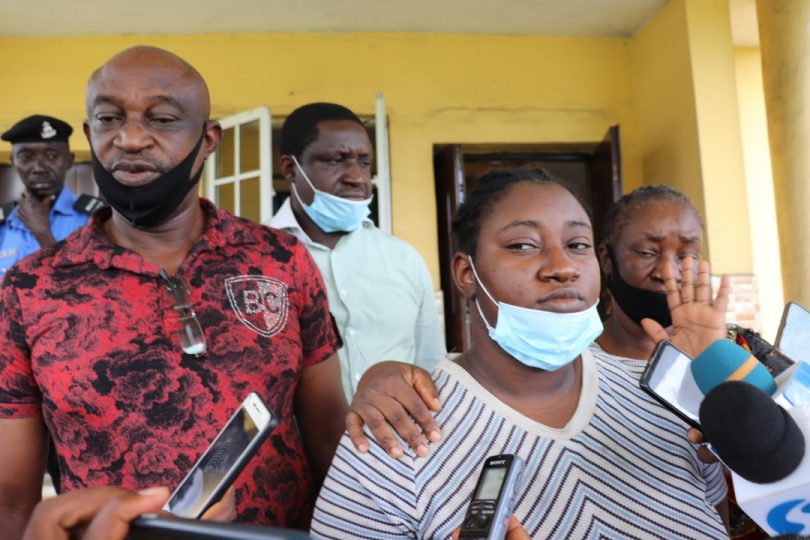 …As Abiru commiserates with victims of another Lagos gas explosion***

The Police Command in Rivers says it has rescued a female lawyer abducted by unknown gunmen at her Port Harcourt residence on Sunday.

The victim, Miss Paulette Ajayi, was kidnapped and taken to a thick forest at Okomoko community in Etche Local Government Area of Rivers.

The Commissioner of Police (CP) in Rivers, Joseph Mukan, announced the rescue in a statement issued in Port Harcourt on Thursday.

According to Mukan, the victim was rescued during a sting operation carried out by the command’s anti-kidnapping unit.

“Our operatives stormed the forest at Okomoko at about 9.30 p.m. on Wednesday and rescued Paulette Ajayi, who was abducted on Sunday at her residence in Rumuokwurushi in Port Harcourt.

“She was freed along with one Paul Nyulaku, 39, who was himself kidnapped on Oct. 10 at NTA Road, Mgbuoba in Port Harcourt, and works for British High Commission, Abuja.

“One of the kidnappers, Chinedu Chigbu, 39, who was keeping watch over the victims, was arrested, while another member was fatally wounded during exchange of gunfire,” Mukan said.

The police boss said the wounded suspected kidnapper was taken to a hospital, but was later pronounced dead.

“Other members of the kidnap gang escaped into the bush with gunshot wounds during the raid, while their camp was immediately destroyed.

“Exhibits recovered from the kidnappers include, one AK-47 rifle, a fully loaded magazine and 100 rounds of live ammunition,” he said.

According to Mukan, operatives are currently on the trail of other gang members, calling on residents of Etche communities to report anyone with gunshot wounds to the nearest police station.

Recounting her ordeal, Ajayi said the gunmen had raised her ransom from N50 million to N200 million as news of her kidnap went viral.

She said her abductors were on the verge of killing her when police operatives made the timely intervention and rescued her.

“I don’t know where they kept me. They demanded ransom of N50 million and later increased it to N200 million as everybody had reported that I was missing.

“Some of the men were violent and kept beating me, while others kept saying that they will let me go if ransom is paid.

“The kidnappers were planning to kill me, knowing that as news went round, pressure will be on them.

“They were actually planning to move me into the swamp yesterday (Wednesday) night to kill me.”

In another development, however, the APC Lagos East Senatorial candidate in the Oct. 31 bye-election, Mr Tokunbo Abiru on Thursday condoled with victims of gas explosion in Baruwa area of Lagos.

Abiru, also commiserated with the state government, saying he was saddened by the incident which claimed lives and destroyed several buildings.

“This morning, I received the reports of an explosion that occurred at Best Roof Cooking Gas Plant, Baruwa in Alimosho Local Government area of Lagos State with grief.

“As a result of this gas explosion, lives were lost; property devastated and some residents around the plant sustained varying degrees of injury.

“This explosion occurred only fortnight after a similar incident wreaked havoc at Iju Ishaga, Ifako-Ijaiye area of Lagos State.

“It also happened about seven months after another explosion that decimated lives and assets in Abule Ado, Amuwo-Odofin area.

“All these incidents are indeed grievous and painful to us all, especially the families of the victims.

“In sobriety, therefore, my heart is with the families of those who suffered mild and irredeemable fatalities due to this explosion,” he said in a statement.

Abiru said the final reports of the state government and its regulatory agencies had identified negligence on the part of the gas plant operators as the root cause of the explosion.

He said: “As a result, the state government has promised to take stiffer measures against operators of gas plants or any combustible items in the state to avoid future recurrence of such disaster.

“We agree in entirety with the measures taken by the administration of Gov. Sanwo-Olu.

“We, therefore, urge the Department of Petroleum Resources (DPR) to further synergise with the Lagos State Government.

“This is to ensure total compliance with health, safety and environment standards before and after licences are issued to operators of gas plants.”

Abiru also urged all Lagos residents  to always report cases of violation anywhere health, safety and environment standards were compromised in the state.

“Every people of Lagos must take this obligation seriously in support of the state government.

“This is a measure to forestall avoidable loss of lives, destruction of assets and disruption of public life in the future,” he said.