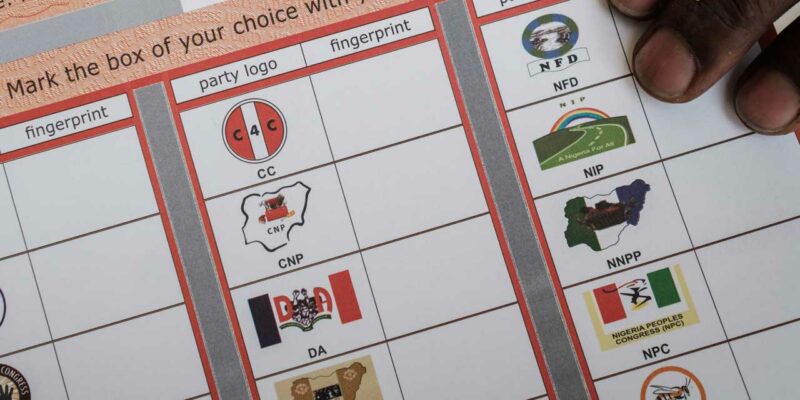 Heavy rainfall has disrupted the ongoing election process in Ijebu area of Owo Local Government of Ondo State, with the rain destroying some election materials and some voting booths thoroughly soaked, while staff of INEC took refuge and struggled to secure the materials.

The voters also scampered to various directions to take shelter from the rain.

The voting later commenced with security personnel keeping vigil at all polling units around the area.

At polling unit 002 in Ward 5, Ijebu-Owo area, it was observed that voters wore their face masks, while INEC staff also made hand sanitizers and soap available for use.

She explained that the use of facemasks was compulsory while any voter showing symptoms of COVID-19, like incessant coughing, would be politely asked to leave the queue.

Opeyemi, who also said that branded face masks were prohibited, declared the voting open by 8:35 a.m,.

The rain however stopped around 8:12 a.m while the first vote at that polling was cast by 8:51 a.m.

In the meantime, the Resident Electoral Officer (REC), Dr Emeka Ononamadu who is supervising Owo, Ose and Akoko South West of Ondo State, has commended voters in the state for their peaceful conduct in the Governorship election.

Speaking with newsmen at Ijebu II Unit 006 Ward 5, Onoamadu said:”we commend the splendid conduct of the electorate as well as security agencies,”.

Ononamadu said that the turn-out of voters was also impressive, describing it as a background for a successful election.

“We have not recorded any negative reports so far. All other things are going on so well. We hope that it continues into the final moments,” he said.

The REC also described the early rain as “a shower of blessing which means that things are going to work well for Nigerians”.

“The conduct of the electorate had been wonderful and peaceful, expressed  the hope that if this tempo is maintained, then we can say there won’t be much problem at the end of the day”.

Adeyanju also commended the peaceful and early deployment of personnel by INEC, security agencies, and other critical stakeholders.

“Electorates are eager to vote and they are in line, despite the rain. Pls let us maintain this same tempo for the day because everything has been orderly and peaceful so far,” he said.