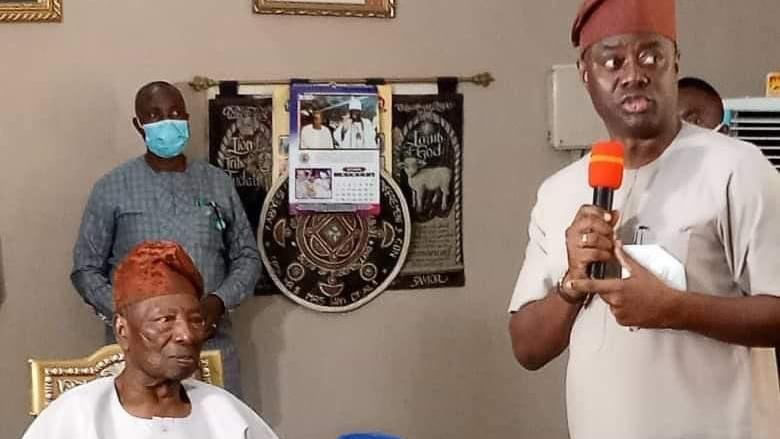 …As Akeredolu receives certificate of return, vows not to contest election again***

Gov. Seyi Makinde of Oyo State, on Tuesday, visited the Soun of Ogbomosho, Oba Jimoh Oyewumi Ajagungbade, whose palace was invaded by hoodlums in the wake of EndSARS protest.

Makinde, during the sympathy visit to the traditional ruler of the ancient town, inspected structures, vehicles and other valuable property damaged during the incident.

Speaking at the palace, the governor gave a directive for immediate release of N100 million to the monarch, for the renovation of the palace.

He also instructed the State’s Commissioner for Local Government and Chieftaincy Matters, Chief Bayo Lawal, to take inventory and make an evaluation of vehicles and other items destroyed for repair and replacement where necessary.

“Beyond the EndSARS protest, most Nigerians are frustrated over prevailing harsh economic reality in the country and if government fails to address youth idleness with gainful employment, there may be future disaster,” Makinde said.

He said that his administration remained committed to ensuring that youth in the state were meaningfully engaged.

The governor said that his government was not against peaceful protest, but admonished protesters to be responsible enough while protesting.

In his response, Oba Oyewunmi said he appreciated the visit and promised that the traditional institution would continue to play its roles in supporting the government for a better society

He urged the government to continue carrying out its numerous responsibilities for the overall development of the state.

The governor and his entourage also paid condolence visits to the families of the three men that died in the course of the EndSARS protest in the town.

The deceased were Isiaka Jimoh, Taiwo Adeoye and Moshood Ganiyu.

Makinde, who released N1million to each of the families, urged them to take the untimely demise of the deceased as an act of God.

The Governor also visited Ogbomosho Area Police Command, where he held a brief closed-door meeting with the officer in charge.

In another development, the Independent National Electoral Commission (INEC), on Tuesday, presented a certificate of return to Gov. Oluwarotimi Akeredolu of Ondo State, as the duly-elected governor in the Oct. 10 election in the state.

Akeredolu who is of the All Progressives Congress (APC), emerged winner of the election after defeating Eyitayo Jegede of the Peoples Democratic Party and Agboola Ajayi of the Zenith Labour Party.

He polled 292,830 votes as against Jegede’s 195,791 and Ajayi’s 69, 127.
Receiving the certificate, Akeredolu pledged to treat all citizens equally, regardless of their party affiliations, adding, however, that he would not run for any elective position in the state again.

He said that his administration would continue to work for the entire state, regardless of the area that voted or that did not vote for him during the election.

“I want to pledge to the people of Ondo State that, with the confidence reposed in us, we will continue to do our best to serve them in a way they have never seen before.

“Those who voted and those who did not, we will treat everybody equally. We will continue to work for the state, irrespective of political affiliations,” he said.

Akeredolu, who said that the certificate would be his last in the state, dedicated the victory to the people of the state, his deputy and his immediate family.

“I promise you that I will not run for any elective position in the state again, even the senate. So this victory is not for me alone but also, for the people of Ondo State.

“And also, it is a victory in which a few things have been established for generations to come. It is clear that no other person has ever won in 15 local government areas before in the state; it is unprecedented,” he said.

Earlier, Dr Rufus Akeju, the Resident Electoral Commissioner (REC) in the state, explained that the presentation of certificates of return to winners of the election to the office of the governor and deputy governor was in line with the provisions of Section 75 (1) of the Electoral Act 2010 (As Amended).

According to Akeju, the law says that the certificate of return shall be issued within seven days to every candidate who has won an election under the act, adding “it is the spirit of this law that we are fulfilling today”.

He reassured all stakeholders in the electoral process that INEC would continue to build on the high level of credibility it had achieved so far and would not do anything to undermine it.

The REC also urged stakeholders to continue to cooperate with INEC in its efforts at consolidating and deepening the country’s democratisation process by playing their roles, in line with the constitution and other regulations of the commission.

“I want to use this opportunity to appeal to the governor-elect and the deputy governor-elect to be magnanimous in victory by using the renewed mandate given to them by the good people of the Sunshine State to serve them diligently and truthfully.

“This will go a long way in reviving the lost spirit of participation by majority of voters who had lost hope in our democracy as a result of seeming lack of governance with direct impact on their lives,” he said.