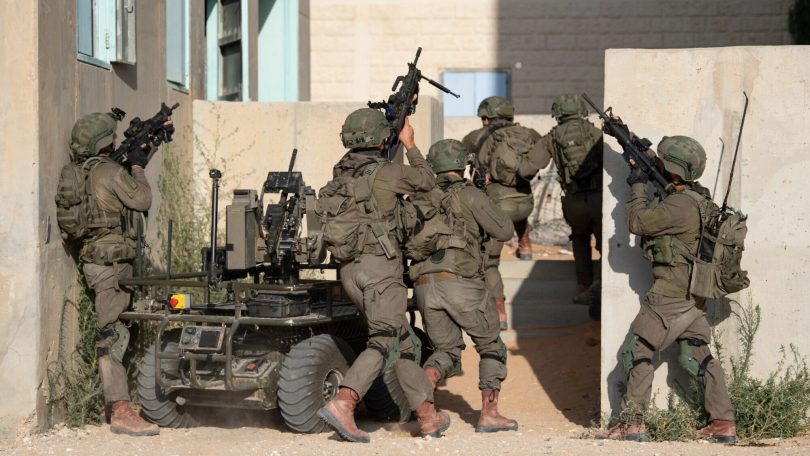 In the summer of 2019, the Israel Defense Forces formed a completely new kind of elite unit, and many of the details surrounding its activities remains unknown. What is known, however, is that the new Multi-Dimensional Unit is an unprecedented military formation, which does not rely on any pre-existing military model.

Its personnel must be able to operate in every kind of combat arena, with its central mission being the rapid identification, tracking down and destruction of enemy targets.

The Multi-Dimensional Unit is part of the new, multi-year military working plan, dubbed Momentum, which was introduced by the IDF Chief of General Staff, Lt. Gen. Aviv Kochavi.

One of the central pillars of the Momentum program relates to the IDF’s ground maneuvering capabilities, which the program envisions becoming significantly more lethal. Momentum calls for a major expansion of ground forces ammunition stockpile and an expansion of the ground vehicle fleets (with a special emphasis on producing more state-of-the-art Merkava 4 tanks and modern armored personnel carriers, all of which have active defense systems installed onboard).

The ground forces’ ability to detect and strike enemy targets in short time periods is a key aspect of the plan, and it is in this context that the arrival of Multi-Dimensional Unit should be seen.

‘Ability to expose, locate, attack and destroy the enemy’

According to the new perspective in the IDF General Staff, a ground maneuver—to be successful—must be a multi-branch affair, and be able to combine airpower, cyber capabilities, precise firepower, an ability to act in the electromagnetic spectrum and be backed by efficient logistics. All of these aspects are designed to come together to destroy enemy capabilities and reduce the adversary’s combat effectiveness.

While all of the ground forces are undergoing changes in line with this vision, the Multi-Dimensional Unit takes that concept and encapsulates it into a single unit. This is first visible from its very make-up: The unit consists of soldiers from various elite reconnaissance battalions from the Paratroopers, Golani and Nahal, infantry brigades, alongside elite reconnaissance companies from the Armored Corps. These are joined by soldiers from the Yahalom elite combat engineering corps, Duvdevan special forces and the Oketz canine special forces unit. In addition, pilots and personnel from the Israel Air Force’s Headquarters have joined the mix.

“The unit’s personnel will know how to operate in all combat arenas with its uniqueness lying in its ability to expose, locate, attack and destroy the enemy in all sectors and domains. In addition, the unit is designed to develop knowledge that will influence the structure and organization of other sections of the military, and which will lead to other learning processes,” the IDF said, in describing the unit.

Personnel first started arriving at the unit in January this year, reporting for duty under the command of a lieutenant colonel, who will head up the unit. Its personnel will use weapons developed specifically for the Multi-Dimensional Unit, though further details remain classified.

The unit’s formation is so important to the Chief of General Staff that Kochavi took it upon himself, along with nine other projects related to the Momentum Plan, because he believes that it will lead to real organizational innovation in the military as it develops.

The Multi-Dimensional Unit will be fed new combat doctrines from the Shiloah [launching] Department, a new section formed in the General Staff, which develops new combat concepts based on studying academic and industrial processes.

‘Ensure the unit fulfills its purpose’

In July, one year after its founding, the Multi-Dimensional Unit completed its first exercise. The IDF described the drill as “a significant step towards making the unit operational. As part of the exercise, the unit’s soldiers trained and operated new multi-branch and multi-domain fighting methods. All methods were developed within the unit, in cooperation with different branches and units in the IDF, among them the IAF, units in the Intelligence Directorate, units in the Cyber Defense Directorate and various firepower units. The soldiers activated groundbreaking abilities that were developed within the defense industries. These abilities and methods will be deployed by the maneuvering units of the IDF.”

During the exercise, the unit worked very closely with F-16 fighter jet squadrons and a variety of drones.

The drill was visited by Kochavi, who was shown a new technique that was developed in the unit for attacking targets; it includes attacking targets with a fighter jet that is activated by the soldiers on the battlefield in real-time.

In the exercise, the soldiers also activated an Apache AH-64 190th helicopter Squadron.

An additional series of exercises is planned for the future, and in each exercise, the unit will add operational capabilities to its existing capabilities, the military stated.

Brig. Gen. Yaron Finkelman, the Commanding Officer of the 98th Division, under which the Multi-Dimensional Unit operates, said after the drill that “during the past year, the commanders have worked very hard to ensure the unit fulfills its purpose.”

He added that the unit marks the arrival “of new advanced operational methods and abilities alongside coordination between ground, air, intelligence and cyber forces. The 98th Division is proud to take part, and lead the establishment and operative steps of the unit, as part of the effort to improve the ground forces’ readiness for the next war.”