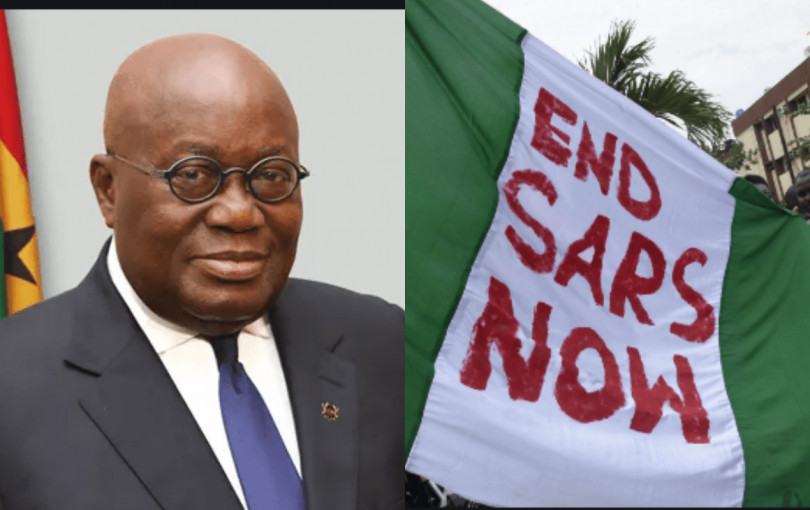 …As Airlines cancel flight operations to states under curfew***

President Nana Akufo-Addo of Ghana says violence, “be it on the part of the police or protesters, cannot be the solution” to the current happenings in Nigeria.

Akufo-Addo, the Chairman of the Economic Community of West African States (ECOWAS), made the observation on Twitter while commenting on the ongoing #ENDSARS protests in Nigeria.

“I join all well-meaning persons in calling for calm and the use of dialogue in resolving the #ENDSARS impasse in Nigeria.

“I have spoken with President Muhammadu Buhari, who is committed to this end and has begun the processes that will lead to reform.

“To the families who have lost their loved ones, I express my sincere condolences and I wish the injured a speedy recovery,’’ Akufo-Addo said.

The newsmen report that the protests against police brutality have been going on for days until Tuesday when hoodlums infiltrated, turning peaceful protests into violent crisis in parts of the country.

In the meantime, some local Airlines at the Nnamdi Azikiwe International Airport, Abuja have announced the cancellation of flight operations to the states where curfews have been declared.

The airlines stated this in separate interviews with the newsmen on Wednesday in Abuja.

Mr Hamza Bukar, Associate Vice-President, Abuja and Regional Domestic North, Arik Airlines, said that the company had canceled all its flight operations due to the curfew announced by the Lagos State government.

He advised all the booked passengers on the canceled flights to reschedule their flights for later dates, at no extra cost.

The Station Manager of Aero Contractors, Mr Abdulmalik Jibreel, said that the company had suspended its operations until the situation normalised.

Jibreel said that the company`s staff members would start operating from home at the moment.

“All our members of staff have been directed to stay at home to avoid protesters, while all managers are to operate from home,’’ he added.

Mr Nuradeen Aliyu, the Assistant General Manager of the airline, said that flights could only operate on the routes of the states that were free from the curfew.

He said that the blockage of the airport road by the protesters had affected the passengers seriously and had badly affected the company`s operations.

“Moreover, the curfews imposed by some states have left us with no option than to cancel all the flights to those states,” he said.

Aliyu added that the development had further affected the fragile operations of the airline which was just recovering from the impact of the COVID-19 pandemic, adding “the situation is worrisome.

Also, the Max Air Station Manager, Mr Kehinde Ogunyale, said that the company would concentrate its operations on internal sectors from Abuja, for now.