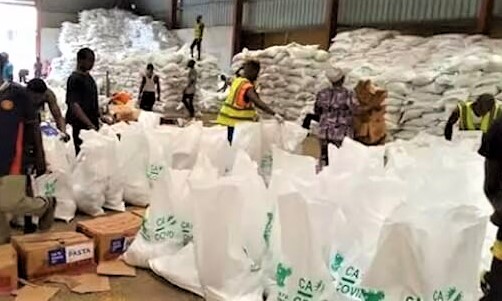 A correspondent at the scene saw many in their numbers carting away bags of rice, noodles, salt and gallons of vegetable oil.

They had earlier in the day blocked the Muritala Mohammed Highway, restricting vehicular movement.

As at the time of this report, men of the Nigerian Police Force, who just arrived the scene, were seen trying to restore order,

However, dispersing the crowd that had built was a herculean task as more and more people were seen trooping to the warehouse despite sounds of gunshot.

Some of the people seen carting away items from the warehouse were heard saying “the food is ours but they are keeping it for themselves”.

Gov. Ben Ayade has imposed a 24 hours curfew in the state starting from 6 p.m. on Friday.

Residents are advised to observe the curfew as security agents have been mandated to arrest anyone who flouts the order.

Similarly, hundreds of suspected hoodlums on Friday besieged the premises of Kwara Ministry of Agriculture and looted relief materials being distributed to victims of recent rainstorm in llorin metropolis.

The hoodlums, including females and teenagers, carried various dangerous weapons and chanted solidarity songs while looting the items.

The looting disrupted the ongoing distribution of the relief items under the supervision of some officials of National Emergency Management Agency (NEMA).

The NEMA officials, military personnel and some officials of the Kwara Emergency Management Agency took to their heels immediately they sighted the hoodlums.

The relief materials looted by the hoodlums were bundles of roofing sheet, bags of rice, bags of cement, blankets, among others.

Mrs Lydia Wagami, a NEMA official who spoke with NAN on Friday, said she could not quantify the relief materials carted away by the hoodlums.

She expressed gratitude to God that everybody in charge of the distribution of the items escaped unhurt.

The hoodlums had earlier looted bags of rice from the Cargo shed at the llorin International Airport and the Nigeria Customs office along Ejiba road in llorin.

The activities of the hoodlums caused panic among residents of llorin as commercial vehicles were completely off the roads while the looting lasted.

Several pedestrians tracked to their various destinations while some decided to pass a night where they have gone to.