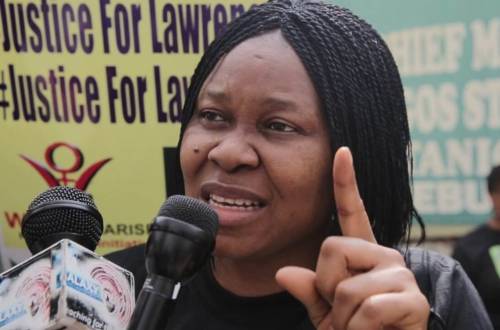 …As Osinbajo says ‘Our police reform agenda will end impunity’***

Dr Joe Okei-Odumakin, President, Women Arise and Centre for Change, on Friday urged all tiers of government to urgently implement policies that would address the grievances of citizens.

Okei-Odumakin, in a statement made available to the newsmen in Lagos, said that there was so much pent up anger in the land as a result of deprivations and poverty.

“It is time to now address such frustration and hopelessness that has made decent living impossible for millions of our people.

“Staggering youth unemployment and high cost of living need to be addressed,” she said.

Okei-Odumakin said the high-handedness in dealings with citizens must become a thing of the past to regain the confidence of the people.

Okei-Odumakin, therefore, urged the government to start making efforts to win back the hearts of the citizens.

She said Nigerians were good people who would positively respond if they see the government making efforts in the right direction.

She noted that Gov. Babajide Sanwo-Olu’s decision to relax the curfew was understandable as Lagos was the commercial nerve centre of the country.

“The horrendous damage done to businesses and infrastructure also has to be taken account of by those concerned and a way forward plotted.

“A state yet to recover fully from months of COVID-19 lockdown cannot endure another long lockdown without harsh economic consequences.

“It is important that normalcy return as soon as possible while government brazes up to do the needful in terms of responding to the root causes of the crisis.

“We are saddened by the lives of patriotic youths lost and the quantum of destruction witnessed,” she said.

Okei-Odumakin also said that her organisation commiserates with those who lost their lives and prayed the good Lord to heal the land.

In the meantime, the Vice President, Yemi Osinbajo has assured that the police reforms plan of both the federal and state governments will be a game-changer, particularly toward ensuring an end to impunity.

The plan include investigating police brutality as well as providing compensation to victims of the disbanded Special Anti-Robbery Squad (SARS) and other police units.

Osinbajo’s spokesman, Laolu Akande, in a statement on Friday in Abuja, said the Vice President made the pledge on Thursday when he received at the Presidential Villa, Abuja, an American government delegation.

The Charge d’Affairs, US Embassy, Kathleen FitzGibbon and Foreign Affairs Minister, Geoffrey Onyeama, were also at the meeting.

According to the Vice President, no fewer than  13 states including Lagos, have established Judicial Panels “to seek justice and to compensate those whose rights have been breached.”

He said that the President had already supported the decisions of the National Economic Council (NEC).

NEC on Oct. 12 resolved on the immediate establishment of State-based Judicial Panels of Inquiry to receive and investigate complaints of police brutality or related extra-judicial killings to deliver justice for all victims of the dissolved SARS and other police units.

Osinbajo said that NEC also agreed on the provision of monetary compensation to victims and prosecution of erring officers.

While responding to the concerns of the US government on instances of impunity in the country, the Vice President noted that the efforts were part of the Nigerian government’s commitment to implement extensive police reforms.

He added that the establishment of Judicial Panels of Inquiry nationwide would further ensure that the Police and other security agencies ensured the protection of human rights of citizens.

“The concerns around impunity are some of the concerns that informed the establishment of Judicial Panels of Inquiry across states. Each state is now required to establish judicial inquiry that will look into cases of impunity, excessive use of force, extrajudicial killings especially by law enforcement agents.

“Each State is also required to have what is called the Special Security and Human Rights Committee to ensure that law enforcement and security agencies protect the Human Rights of citizens.”

“Government is paying attention; the point we are making is that protests are a means to an end, but they cannot be the end; we are very optimistic that what we have put in place would eventually yield the best possible results for us,” he said.

The Vice President also highlighted what he termed false narratives about Nigeria, including the herder-farmer crisis, especially in North Central states and the politics behind the allegations.

Osinbajo said the herder-farmer crisis was exacerbated mainly because of land and resources struggle than from the misinterpreted Christians-versus-Muslim narrative.

Members of the US delegation from Washington DC offered to collaborate with the Federal Government on the issues, a suggestion welcomed by the Vice President hoping that such cooperation would create better understanding of the issues.