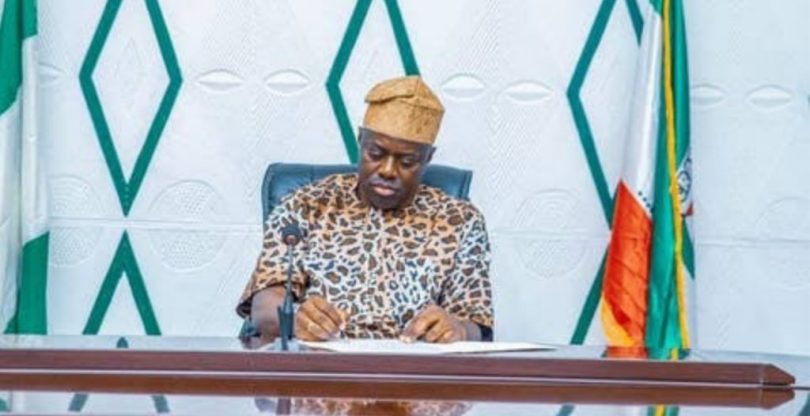 …As Fintiri says: I will sign executive order to recover looted property***

Gov. Seyi Makinde of Oyo state, says he has signed a document for the immediate recruitment of 1,500 personnel to kick start the Southwest Security Network, codenamed, Amotekun, in Oyo state.

Makinde made the disclosure on Tuesday, in Ibadan, during the post-protest meeting held with representatives of Youths, Artisans, commercial motorcycle operators and Taxi drivers.

The post-protest meeting was held within the State House of Assembly complex, Agodi, Ibadan.

Makinde said the new intakes of the Amotekun outfit will undergo two weeks of training, between Nov. 1 and Nov. 15.

He also disclosed that the State Panel of Enquiry on Police brutality will be inaugurated on Nov. 2, assuring that various pressure groups in the state will be represented as members of the panel.

In her remarks, the Youths leader in Oyo state, Mrs Bobola Agbeja, said that her group will continue agitating for what is right, stressing that the youths will not be discouraged in engaging in peaceful protests to express their grievances.

Agbeja, however, declared that none of the EndSARS protesters was involved in the violence and looting witnessed recently in the state.

She implored the Makinde-led administration to do more in looking at ways it could engage the youths meaningfully.

In another development, Gov. Ahmadu Fintiri of Adamawa says he will soon sign an executive order for a house-to-house search to recover government and private property looted by some hoodlums across the state.

Fintiri, who stated this during a broadcast in Yola on Tuesday, called on the looters to return all looted property before 7 a.m. of Wednesday, Oct. 28.

“Consequently, I am giving a 12-hour ultimatum from 6 p.m. – 6 a.m. to those hoodlums to return whatever they looted from public and private warehouses and homes to the nearest police station.

“They can also return it to traditional rulers’ house from the ward to the district level, whichever is nearest to them.

“This ultimatum will expire at 6 a.m. on Wednesday, 28th – October, 2020, after which I will sign an Executive Order for a house-to-house search to commence by 7 a.m. of the same day,” the governor added.

According to him, part of the provision of the order is a sanction that will attract withdrawal of Certificate of Occupancy (C of O) and if necessary, demolition of every house that habours any of the stolen properties.

Fintiri called on the law-abiding citizens to cooperate with the security agencies to ensure the enforcement to the letter.

He said so far 155 suspects have been arrested including nine vehicles and 12 tricycles that were recovered.

The state government had on Sunday imposed a 24 hours curfew.

They also looted the North East Commodity Association (NECAS) Kofare, public and private warehouses in Demsawo, Nyako Quarters, opposite airport, Upper Benue and the Red Cross office, among other places.