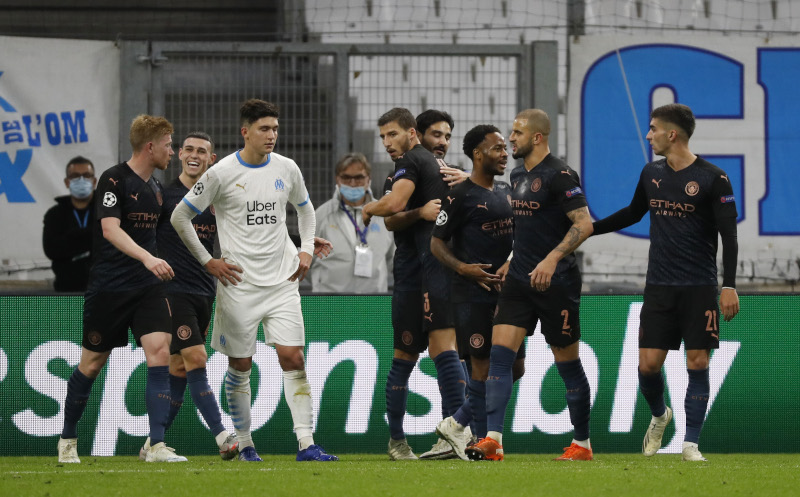 Manchester City were barely troubled as they claimed their second victory in UEFA Champions League Group C by beating Olympique de Marseille 3-0 at the Stade Velodrome on Tuesday.

Ferran Torres, Ilkay Gundogan and Raheem Sterling found the back of the net as Pep Guardiola’s side stayed top of the standings on six points, three ahead of FC Porto and Olympiakos.

Marseille are bottom of the table on zero points after their 10th consecutive loss in the competition.

This was since two defeats in the quarter-finals against Bayern Munich in 2012 and after six defeats in the group stage in 2013-14, in their last appearance.

OM, who lost 1-0 at Olympiakos on their return to the Champions League after a seven-year hiatus, travel to FC Porto.

Manchester City host Olympiakos in the next round of matches on Nov. 3.

Guardiola was delighted with his side’s performance.

“We didn’t concede much, hardly anything,” he said. “We were absolutely under control. We were patient, we were so aggressive without the ball… we played really well.”

“It’s true that it’s a defeat that is hard to take,” said OM midfielder Florian Thauvin. “We knew that they’d have control of the ball and we decided to sit deep and play on the counter.

“Unfortunately, we didn’t put into place what we wanted to. It’s a different level and we have to be honest about that.”

After their 3-1 home win against Porto last week, Manchester City got off to a dominant start, pushing Marseille back and winning three corner-kicks in the opening 10 minutes.

Also read:  EPL: Manchester United in buoyant mood ahead of clash with Chelsea

Marseille were shambolic at the back and paid for it in the 18th minute when Valentin Rongier inexplicably passed the ball to Kevin De Bruyne on the edge of the box.

Torres simply buried it in the net after being set up by the Belgian.

Oleksandr Zinchenko came close to making it 2-0 when his crossed shot shaved Steve Mandanda’s left-hand post after another piece of horrible defending from the hosts.

Marseille were a bit more lively after the break, defending higher up, and Thauvin came close in the 55th minute, only for his 25-metre missile to be tipped on to the post by Ederson.

Manchester City finally made their superiority count after 76 minutes.

Sterling wrapped it up five minutes later, tapping the ball home from De Bruyne’s cross at the end of a long spell of possession.

In another development, Joao Felix bagged a brace for Atletico Madrid as they survived a scare to complete a 3-2 UEFA Champions League Group A victory over Red Bull Salzburg on Tuesday.

At the Wanda Metropolitano stadium, Marcos Llorente put Atletico Madrid ahead in the first half.

But goals from Dominik Szoboszlai and Mergim Berisha swung the fixture in favour of the visitors early in the second half.

However, the excellent Felix regained the initiative for his side with an equaliser, before firing in the winner with five minutes to play.

The win went some way to erase the memory of the 4-0 loss to champions Bayern Munich in their pool opener.

Bayern Munich head the table with a full haul of six points after two rounds, followed by Atletico Madrid on three, and Lokomotiv Moscow and Salzburg with one each.

Felix’s audacious over-head kick inside 15 minutes almost provided an early moment to remember, but his acrobatic effort crashed against the crossbar and away to safety.

Atletico Madrid did have the lead before the half hour mark as Llorente picked up the ball 25 yards from goal and drilled the ball low past Salzburg goalkeeper Cican Stankovic.

Certainly the goalkeeper will, after the goal, feel he should done better.

Llorente should have doubled the advantage shortly afterward when he found himself one-on-one with Stankovic, but it was Salzburg who scored next.

Some sloppy play in midfield turned over possession and the ball eventually reached Szoboszlai, who thrashed his shot past home goalkeeper Jan Oblak.

Salzburg made a lightning start to the second half and were ahead inside a minute as Andreas Ulmer’s cross was turned home at the back post by Berisha.

But that lead was short-lived as Felix finished a sweeping Atletico Madrid move that left him with a tap-in to equalise.

Thereafter, He lashed in the winner as the Salzburg defence stood static following a low cross into the box.