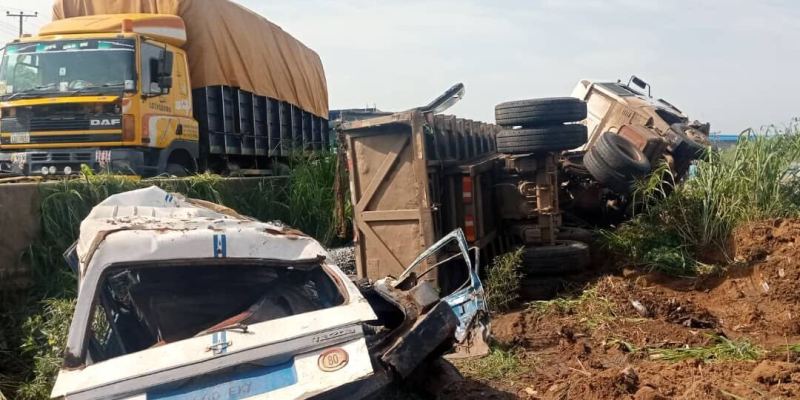 …As another in court for reckless driving, causing death of pedestrian***

The Ogun Traffic Compliance and Enforcement Corps (TRACE)  said three persons died in an accident at Lotto, opposite NNPC Filling Station on Lagos-Ibadan Expressway, on Friday.

One person also sustained injuries in the accident which involved two vehicles, according to the agency.

Mr Olusola Ojuoro, the Mowe/Ibafo Area Commander of TRACE, highlighted in Ota, Ogun, that the accident happened at about 8.45 a.m.

Ojuoro said that an Iveco truck with registration number AAB 458 ZY was inbound Lagos when it lost control due to brake failure and crushed a Mazda bus marked XY 660 EKY.

“The corpses of the victims have been deposited at Idera Hospital Morgue, Ogun, while the survivor was taken to an undisclosed hospital by his relative,” he said.

He urged them to ensure that their vehicles were in good condition before putting them on the road to avoid unnecessary loss of life.

Ojuoro also commiserated with the families of those that lost their lives and prayed God to grant them fortitude to bear the losses.

In another development, a 35-year-old man, Abiodun Afolabi, on Friday appeared in an Ikeja Magistrates’ Court for allegedly causing the death of a pedestrian.

The police charged Afolabi, who resides in Agege in Lagos, with reckless driving, manslaughter and driving without driver’s licence.

The Prosecution Counsel, Sgt. Sunkanmi Adejumo, told the court that the defendant drove a Toyota Camry Saloon car with registration number LND911DG in a careless and inconsiderate manner and caused the death of a 35-year-old man, Mr Audu Isiaka.

Adejumo told the court that the defendant committed the offence on July 29 at 8.30 p. m. on the  Oba-Akran Avenue in Ikeja, Lagos.

The victim, he said later died at the Lagos State Teaching Hospital.

He said that the defendant also drove the car without a driver’s licence.

The offence, he said, contravened the provisions of sections 12, 50 and 52 of the Road Traffic Law and Regulations, 2018.

Afolabi pleaded not guilty to the three counts.

Magistrate K.A. Ariyo admitted Afolabi to bail in the sum of N250, 000 bail with two sureties in like sum.

Ariyo ordered that the sureties who must be gainfully employed, must provide evidence of two years tax payment to the Lagos State Government and their addresses verified.

The magistrate adjourned the case until Nov. 13 for hearing.