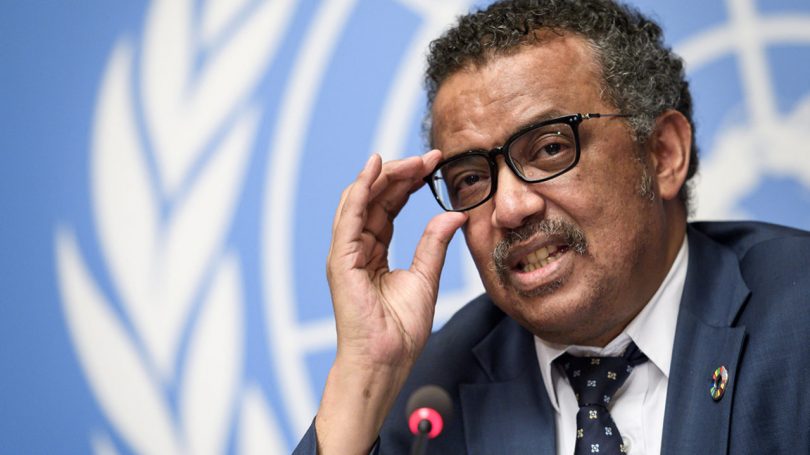 …To set up centre on traditional medicine in India***

Global measles deaths increased by 50 per cent from 2016 to 2019, claiming over 207,500 lives in 2019, WHO said in a statement issued from its headquarters on Thursday in Geneva citing figures from a joint report it published with the US Centre for Disease Control (CDC).

“Measles killed an estimated 207,500 people in 2019 after a decade-long failure to reach optimal vaccination coverage, resulting in the highest number of cases for 23 years.

“This year, there have been fewer cases, but the COVID-19 pandemic has further set back vaccination efforts, with more than 94 million people at risk of missing measles vaccines in 26 countries that have paused their vaccination campaigns, including many countries with ongoing outbreak’’, WHO said.

The statement quoted Dr Tedros Ghebreyesus, WHO Director-General, as saying “we know how to prevent measles outbreaks and deaths.

“These data sends a clear message that we are failing to protect children from measles in every region of the world.

“We must collectively work to support countries and engage communities to reach everyone, everywhere with measles vaccine and stop this deadly virus.”

Similarly, the statement also quoted Henrietta Fore, UN Children’s Fund (UNICEF) Executive Director, as saying “before there was a coronavirus crisis, the world was grappling with a measles crisis, and it has not gone away.

Measles is entirely preventable, but success requires 95 per cent of children to be vaccinated on time with two doses of measles-containing vaccines (MCV1 and MCV2).

MCV1 coverage had stagnated globally for more than a decade at between 84 and 85 per cent, while MCV2 coverage has been steadily increasing but is still only at 71 per cent.

Natasha Crowcroft, Senior Technical Advisor on measles and rubella at the WHO, said that the good news was that measles vaccinations had saved more than 25.5 million lives globally since 2000.

“But the low vaccine coverage means the number of unprotected children was growing every year; the big issue is not actually large holes in coverage, it’s the stalling in coverage.

“It’s a bit like, you know, tinder for a forest fire, it reaches a point where an outbreak really takes off. That’s what we saw in 2019, with the almost explosive outbreaks in areas that have had inadequate coverage over many years.

“If you have coverage around about that 80 per cent level, then you get the sense that things are going okay, but they’re not really, and eventually you see these large outbreaks.

“Weak health systems and the inability to reach children were the main problem globally, and vaccine hesitancy was an additional problem in some countries,’’ Crowcroft said.

On Nov. 6, WHO and UNICEF issued an emergency call to action on measles and polio outbreak prevention and response, calling for an additional $255 million over the next three years.

The UN agencies are calling for the additional funds to address dangerous measles immunity gaps in the 45 countries at the highest risk of an imminent outbreak.

“Infections are not only a sign of poor measles vaccination coverage, but also a known marker, or ‘tracer,’ that vital health services may not be reaching populations most at-risk.

“Our collective efforts to reach children with vaccines now, ahead of the possible easing of COVID-19 travel restrictions and increased population movement, will save lives.”

In the meantime, the World Health Organisation (WHO)’s Director-General Tedros Ghebreyesus on Friday said that the global health body will set up a global centre on traditional medicine in India.

“I am pleased to announce that we have agreed to open a WHO global centre on traditional medicine in India to strengthen the evidence, research, training and awareness of traditional and complementary medicine,” Ghebreyesus said.

“This new centre will support WHO’s efforts to implement the WHO traditional medicine strategy 2014-2023.

“The establishment of the centre aimed at supporting countries in developing policies and action plans to strengthen the role of traditional medicine as part of their journey to universal health coverage and a healthier, fairer and safer world,” said the WHO chief.

Ghebreyesus’s message came during an event in which Indian Prime Minister Narendra Modi virtually inaugurated India’s first two Ayurveda institutions, which are located in the cities of Jaipur and Jamnagar.

Modi thanked the WHO to set up a global centr on traditional medicine in India.

In 2014, the Indian government created a separate ministry of AYUSH (Ayurveda, Yoga and Naturopathy, Unani, Siddha and Homoeopathy) to promote the indigenous medical management system in the country.

Since 2016, India observed the Ayurveda Day every year.