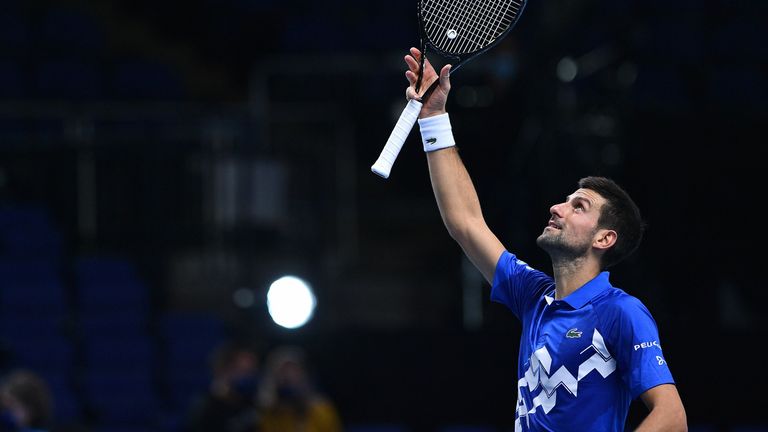 World number one Novak Djokovic says he still does not know whether the ATP Cup will take place in Australia in January.

Djokovic led Serbia to the title in the first edition of the 24-nation tournament this year before going on to win the Australian Open for a record-extending eighth time.

Tennis Australia boss Craig Tiley has said all the Australian Open warm-up events, including the ATP Cup, will be held in the state of Victoria next year.

He had said this was in light of the COVID-19 pandemic, although state premier Daniel Andrews said that was “not a done deal”.

Players will have to undergo a two-week quarantine period before being cleared to play in Australia ahead of the Melbourne Grand Slam.

This would have posed logistical problems as they would have to arrive in the country far earlier than usual.

Asked about the situation after his 6-3 6-2 win over Diego Schwartzman in his first match at the ATP Finals on Monday, Djokovic said it was challenging.

“We don’t know whether ATP Cup is happening. We heard some rumours there might be eight teams only,” he said.

“Obviously you want things to be ideal, but what is ideal in these circumstances? We really don’t know. So I think it’s out of our reach.

“Also Tennis Australia has to follow what the Australian government is regulating and proposing them to do.”

This year’s ATP Cup was staged across Brisbane, Perth and Sydney with the final in Sydney.

Under the new plan, that would be impossible with players restricted to Victoria where they will be free to move around once they have completed a two-week quarantine.

“From what I’ve heard the latest news from Tennis Australia is that the Australian Open and the rest of the tournaments will be held in Victoria state, mostly Melbourne and around Melbourne,” Djokovic said.

“I hope that it will happen. I want to play in Australia, Australian Open. I’m not sure about the ATP Cup and the tournaments before, because obviously, you have to leave quite in advance, I think two-and-a-half or three weeks prior to the first match,” Djokovic said.

“I’m just hoping for the sake of tennis and the sake of players that we will have the Australian Open and also the possibility of ATP Cup and couple more tournaments at least.”