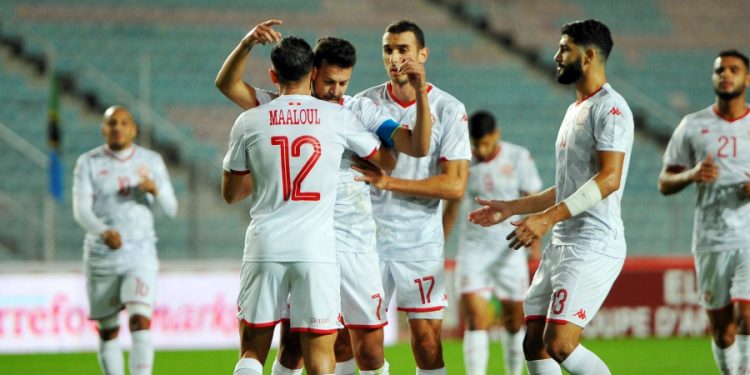 Tunisia and Mali have joined 2019 finalists Senegal, holders Algeria as well as hosts Cameroon as the qualified teams for the 2021 Africa Cup of Nations (AFCON).

This was after both picked favourable results in match day four games.

Tunisia progressed in spite of a 1-1 draw with Tanzania in Dar es Salaam, while Mali went through after a 2-1 victory away to Namibia.

In Tanzania, the Carthage Eagles moved to 10 points on top of Group J after four matches and preserved their unbeaten run.

Tanzania moved to third with the point, getting to four points and two behind second-placed Equatorial Guinea to keep their qualification hopes alive.

Tunisia went into the break a goal up, Khaoui’s goal the difference between the two sides.

Khaoui had struck the back of the net with a well-taken first-time shot after being teed up by skipper Youssef Msakni.

The Carthage Eagles had quickly turned play around after Tanzania’s DItram Nchimbi who failed to control a long ball, chesting it to Ali Maaloul’s path who launched the play forward.

The Tunisians were gifted for a positive start to the match and before the goal, Msakni had struck the upright after Tanzanian goalkeeper Aishi Manula came off his line.

But he failed to pick the ball, gifting the Tunisian skipper with a golden chance.

The North Africans continued running rings around their hosts and controlled massive possession.

Wahbi Khazri came close in the 21st minute but his snap shot from inside the box was wide.

In the 24th minute, Khaoui came close to doubling his and the team’s tally but his brilliant shot off a cheeky Khazri backheel pass rattled the crossbar.

The Tanzanians made an early change, Salum coming on for Himid Mao, a change geared to improve the Taifa Stars’ creativity in midfield.

The home side came from the breather like a new team and it only took them two minutes to get to level terms.

A cross from Nchimbi on the right was chested down by John Bocco with Salum striking a first-time effort that flew into the net from range.

Tanzania kept pushing and had another chance in the 53rd minute, Nchimbi’s header from a corner-kick bouncing just wide.

Tanzania’s fight was almost nipped in the bud when Khaoui broke into the box from a Msakni pass.

But he could not connect with his shot well, with goalkeeper Manula making a save.

The home side continued their fight and with a quarter of an hour left came close, but were denied by Ben Mustapha who tipped over Msuva’s curling effort for a corner-kick.

The Tunisians finished the game on a high, and had a chance with two minutes left on the clock but Msakni’s shot from a tight angle was saved by Manula much to the relief of the Tanzanians.

In Windhoek, Mali went top of Group A and booked a ticket to Cameroon after a 2-1 win over hosts Namibia.

Sekou Koita and Moussa Doumbia scored the goals for Mali while Namibia’s consolation was scored by Elmo Kambindu.

The victory takes the Malians top of the table with 10 points, two ahead of Guinea who dropped to second.

Namibia remain third with just three points off one victory.

The visitors were the dominant side in the opening half and deservedly went into the break 2-1 up.

Koita had given them the lead after 12 minutes with a brilliant left foot shot from the edge of the area after being teed up by Alliou Dieng.

The Malian Eagles were enjoying themselves, passing the ball around the park with utmost ease, but often failed to make the possession count for goals.

But, they were 2-0 up 37 minutes in when Doumbia doubled the lead with a well-taken goal, beating the goalkeeper at his near-post after some swift step-overs took him beyond Larry Horaeb on the left to break into the box.

But the two-goal cushion lasted just two minutes, with the Namibians halving the deficit through Kambindu who rose highest at the back-post to head in beyond the goalkeeper from a free-kick.

In the second half, Mali were still in control and should have sealed the victory in the 58th minute, but El Bilal Toure saw his penalty kick saved by the goalkeeper.

Namibia piled on the pressure in the final half hour of the game, but could not get anything to lift them off the ground.

In the meantime, Egypt completed the double over Togo by beating them 3-1 in Lome on Tuesday, to join Comoros on top of Group G with eight points each.

Mohamed “Afsha” Magdy and Mohamed Sherif scored in the opening half, while Mahmoud “Trezeguet” Hassan scored after the break.

Yayra Josue scored a consolation for Togo two minutes into stoppage time as The Pharaohs made it two wins in 72 hours over Togo, having won 1-0 in Cairo last Saturday.

Togo had the first chance after 10 minutes.

Kodjo Laba rounded Egypt skipper Ahmed Hegazy to go one on one with Mohamed Elshennawy but his shot missed the target narrowly.

Two minutes later Gilles Sunu tried his luck with a header that went over.

Hegazy could have scored against his own team but for Elshennawy who saved his miscued header at the quarter hour mark.

But it was the visitors who took the lead after 18 minutes.

Togo’s defensive clearance found Afsha who controlled the ball and scored past Malcom Danjuma to make it 1-0 to Egypt.

Elshennawy was there once again to save the Pharaohs when he stood tall to deny Sunu’s header from Matthew Dossevi cross.

Elshennawy then turned from a goalkeeper to playmaker, when his long pass from Egypt’s penalty area found Mohamed Sherif at the other side of the pitch to double the visitors’ lead after 34 minutes.

Togo returned stronger and could have reduced the deficit three minutes after the break when Dossevi’s first-time shot just went wide.

And it was soon 3-0 for the visitors. Another long pass behind Togo’s defence, this time from left-back Ayman Ashraf found Trezeguet who buried the ball behind Danjuma with Egypt cruising to an away victory.

His crossbar was there to the rescue five minutes from time when Mahmoud Hamdy, who scored the first leg winner, could have scored in his own net this time.

And deep into injury time, defender Yayra Josue followed a rebound ball after a corner-kick to score a consolation goal for the hosts.