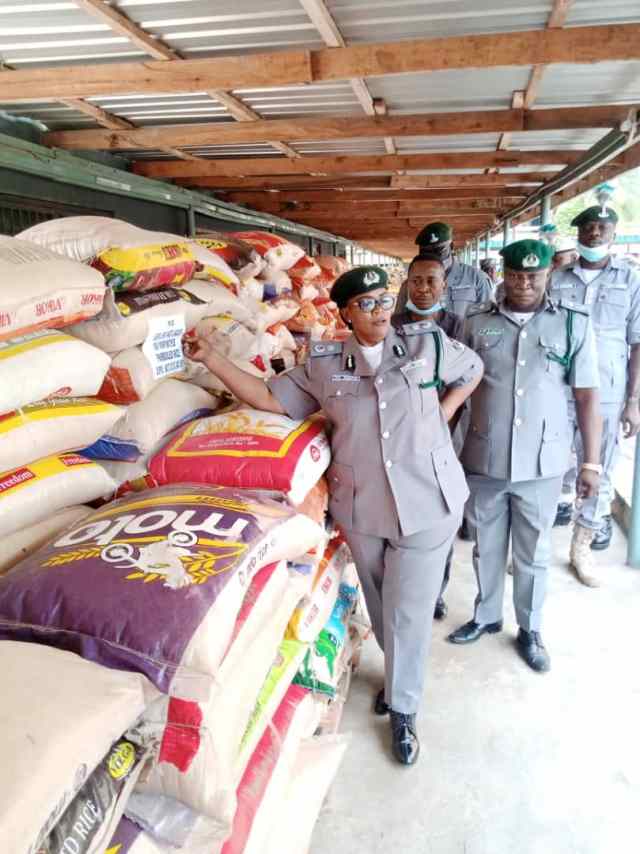 The Oyo/Osun Area Command of the Nigeria Customs Service (NCS), says it has intercepted a total of 624 bags of foreign rice of 50kg each and 214 kegs of petrol of 25kg each after the EndSARS protest.

The command’s Area Comptroller,  Mrs Uche Ngozi, said this during a post-EndSARS press briefing of the command on Thursday in Ibadan.

Ngozi said the officers of the command were back at their border posts in their zeal to carry out anti-smuggling activities.

She said that the nationwide EndSARS protest was hijacked by hoodlums across the nation and this forced the security operatives to concentrate on the protection of their facilities.

“Smugglers leveraged on this opening to perpetuate their nefarious activities along the borders.

“We have further sharpened our intelligence and increased synergy with other sister agencies and took the bull by the horn to nip these smugglers in the bud with maximum intelligence gathering.

” Since the EndSARs protest,  we have made a series of interceptions along various unapproved routes which has helped us with 624 bags of 50kg each of foreign rice with Duty Paid Value of N27,033,240 and 214 kegs of 25 litres each of Premium Motor Spirit (PMS) which will be auctioned and proceeds remitted accordingly,” the comptroller said.

She said that the command had made a seizure of 11,481 bags of foreign rice, 91 gallons of vegetable oil, 1,694 used tryes, 39 cars among others from February till date.

The comptroller commended the officers and men of the command for their steadfastness and zeal to carry out anti-smuggling activities within their area of responsibility.

She also commended other security agencies in the state and community leaders for their cooperation and synergy during the EndSARS protest.

Compt. Olugboyega Peters, the new Coordinator of Joint Border Operations Drill, Sector 3, said this during a news briefing in Ilorin on Thursday.

The coordinator said that part of the strategies deployed against all forms of smuggling, human trafficking and proliferation of arms and ammunition led to 65 seizures of different items.

Peters assumed office on Oct. 12 and within the period, made the following seizures.

A suspect, was, however, arrested.

“We shall continue to wage war against smugglers, as every effort or tactic exhibited by them to beat security checks operatives will remain fruitless.

“Smugglers will be uncovered due to our high level of intelligence, systematic monitoring and mechanism put in place to track down these economic saboteurs and their sponsors,” he said.

Peters said that the current administration had zero tolerance for corruption and revenue leakages in all its ramifications and the sector would continue to re-invigorate strategies that would enhance performance.

Speaking on the attack by ENDSARS protesters on Customs House, Kwara Command, the coordinator commended the efforts of the Nigeria Customs Service, JBOD and all sister security agencies for exhibiting their professionalism in handling the incident.

He said that the aftermath of ENDSARS protest was a commendation letter sent to the command by the Comptroller- General of Customs and his management team for exhibiting such gallantry, in terms of excellent performance, integrity, high ethical standard, good conduct and unalloyed commitment to the service.

The comptroller appealed to Nigerians, especially members of the business communities to assume the duty of border drill as an opportunity to further create a conducive environment for local business.

Peters said that the exercise was for the overall interest of national security, well-being of the citizens and economic development, creation of job opportunities, reduction of crime rate and other social vices.