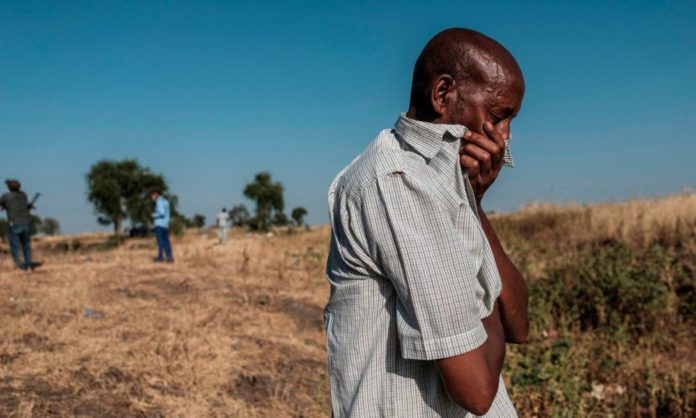 At least 600 people were killed in Maikadra in Southwestern Tigray state on the night of 9 November and hundreds more were wounded, the Ethiopian Human Rights Commission said in a new report on Tuesday.

“While it is not possible yet to verify the exact numbers of the dead, the physically injured and those who suffered property damage, members of a Burial Committee, set up after the attack, eyewitnesses and other local sources, estimate that a minimum of 600 persons have been killed and say the number is likely to be higher still,” the rights body said.

Maikadra, with a population of about 40,000 to 45,000, came under attack days after the Ethiopian army launched a military offensive in the region of Tigray. Members of a rapid investigation team travelled to the region on 14 to 19 November to investigate the attack on the town.

They visited Maikadra, Abrhajira, Sanja, Gondar, Dansha and Humera in the region to gather testimonies and evidences from victims, eyewitnesses, families of victims, first responders, military personnel and other sources, including government authorities, on the ground, the report said.

The right body launched a probe into the mass atrocities in Maikadra in Tigray Region’s Western Zone, for a rapid investigation into purported mass killings of civilians and related human rights violations.

According to the report, the attack started immediately after the attack on a resident named Abiy Tsegaye, whose house was targeted.

The attack was carried out by members of a youth group, named Samri, a local militia, with the help of the local police, moving from house to house and from street to street.

It launched the cruel and atrocious attack on people they pre-identified and profiled as belonging to the Amhara and Wolkait tribes.

“They killed hundreds of people, beating them with batons, sticks, stabbing them with knives, machetes and hatchets and strangling them with ropes. They also looted and destroyed property,” the rights body said.

While Samri, comprised of several groups consisting of 20 to 30 youth each accompanied by an estimated three to four armed police and militia, carried out the massacre, police and militia – strategically posted at street junctions – aided and directly participated in the carnage by shooting at those who attempted to escape, according to the report.

It has been established that the attack is ethnicity-based and specifically targeted men the attackers profiled through, amongst other things, identification cards as Amharas and Wolkaits.

However, a certain number of people from other ethnic groups have also been killed, the human rights body said.

While it can be verified that women and children were spared, some women, including mothers who had tried to shield their families, suffered physical and mental injuries.

Eyewitnesses also said women received threats from the perpetrators that “tomorrow, they will come after the women. It will be their turn”.

EHRC spoke with victims who suffered grave physical and mental injuries, including people whose bodies were maimed by sharp objects or severely bludgeoned, as well as others who were dragged on the ground with their necks tied to a rope.

The team also talked to survivors who described how the attackers tied them to other people before attacking and of being the only ones to come out alive.

The fact that the main target of the attack, the neighborhood of Genb Sefer, is an area where labourers lived together in large numbers, made it possible for the perpetrators to attack between 10 and 15 people at once in a single house, and this accounted for the heavy toll.

A mismatch between a large number of bodies and limited burial capacity meant that burial took three days. EHRC has visited one mass burial site and seen bodies still scattered on the streets.

Locals also said that the bodies the perpetrators dragged and hid in the bushes and “desert plains” outside the town had not been picked up yet and were therefore not included in the estimates.

During the visit, the Commission’s team also noted that the pungent smell of decaying bodies still lingered in the air.

Those targeted were seasonal workers, mainly from the Amhara Region, and a few other areas.

The labourers go to Maikadra for seasonal work on large sesame and millet farms on the outskirts of the town, locally known as ‘desert plains’, and live in one designated neighbourhood with groups of up to 12 people sharing a single house, according to the rights body.

In the meantime, however, the Kenyan President Uhuru Kenyatta and the president of the European Council, Charles Michel, on Tuesday agreed to pursue an end to the fight in Ethiopia which is threatening the stability of the Eastern Africa region.

“The two leaders discussed regional security and Kenya’s membership of the UN Security Council and agreed on the need to end the fighting in Ethiopia,” President Kenyatta’s office said in a statement.

President Kenyatta, who held a virtual summit with the president of the European Council, emphasized that the conflict in Ethiopia is a threat to the stability of the entire Horn of Africa region.

The two leaders met as the UN Security Council was meeting to discuss the situation in Ethiopia.

The TPLF has also fired rockets at Asmara, claiming the rockets were fired to pre-empt attacks from the government of Eritrea.

Former Prime Minister Hailemariam Desalegn wrote on Tuesday that the Tigray People’s Liberation Front was attempting to arm-twist the international community into agreeing to share political power and to continue its influence on Ethiopian politics.

TPLF, the party of the late Prime Minister Meles Zenawi, has been in power since 1991.

Several senior military officers have been earmarked for prosecution for high treason and other crimes still under investigation.