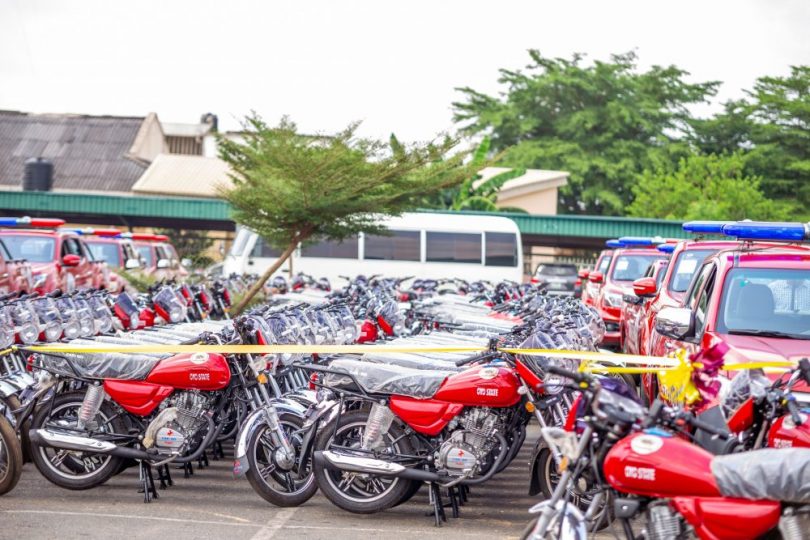 Against the backdrop of rising insurgency, especially of dreaded attacks students, the Executive Governor of Oyo State, Engr. Seyi Makinde on Tuesday, launched 33 pick-up vehicles and 396 motorcycles, for smoother operation of the Western Nigeria Security Network, code-named Amotekun, in the state.

Makinde said the provision of the two facilities was to strengthen the hands of the Amotekun corps, a gesture which attracted the people’s kudos, on account that a stronger Amotekun may offer a more complementary support to other relevant security agencies, in the State.

The governor, who pledged his unalloyed support of the corps, noted that the impact of the Amotekun was already being felt in all nooks and crannies of the state since it became operational.

“Reports reaching me about your performance and attitudes have so far been positive. I, therefore, charge you all to keep it up,” the governor said.

Makinde however, reiterated the need for state police, adding that the establishment of Amotekun would assist in securing the lives and property of the people of the state.

He expressed appreciation to the caretaker chairmen across the 33 Local Government Areas and 35 Local Government Development LCDAs for their contributions and support toward financing the Amotekun.

“I want to use this opportunity to thank the chairmen and chairpersons of our local government areas and LCDAs, because this is your handiwork and it is your money.

“And what we have now is that all the 351 wards in Oyo state would now feel the impact of Amotekun, by extension, every inch of land belonging to Oyo state shall be covered by the Amotekun corps.” he said.

Also read:  Amotekun to flag off with 1,500 personnel- Gov. Makinde

Makinde warned criminally minded people to stay away from the state especially, as during the Yuletide, when some engaged in kidnapping, armed robbery, petty stealing among others as Amotekun would catch up with them.

He assured them that his government would prioritise their welfare, disclosing that he had requested the State House of Assembly to pass the Amotekun budget.

In his welcome address, the chairman of the Oyo State Amotekun Corps, Brig. -Gen. Kunle Togun (Rtd) commended the governor on his efforts to ensure that Amotekun became operational in the state.

Togun also assured the governor and the entire residents that the corps would continue to carry out its duties effectively, so as to curb crime across the state.

In the meantime, the Zamfara Government on Tuesday announced the immediate closure of 10 secondary schools believed to be vulnerable to bandits’ attacks.

The state Commissioner for Education, Mr Ibrahim Abdullahi, made the disclosure when he addressed journalists at his office on measures being taken by the state government to secure lives of school children in the state.

“We have received the approval of Gov. Bello Matawalle to close all the schools located along our borders with our neighbouring states of Katsina and Kaduna, following the recent abduction of over 300 secondary school students at the Government Science Secondary School, Kankara in Katsina state.

“As you know, Kankara shares borders with Zamfara state and that attack is also a threat to our students which was why we suggested to the governor of the pressing need to close down these schools for the safety of our students,” he explained.

According to the commissioner, all the seven boarding schools and one-day school along the state’s borders with Katsina as well as two-day schools along the borders of Kaduna state are affected by the closure.

He urged parents to continue to pray for peace in the state noting that “we are confident that with continuous  prayers, Allah will see us to the end of this problem.”

Meanwhile, the state governor had urged leaders to desist from apportioning blames over the continued bandits’ activities on the dialogue strategy of his administration.

Matawalle, who spoke through his Special Adviser on Media, Mr. Zailani Bappa, said:  “the carrot and stick approach introduced by Matawalle to end banditry remains the most viable option.

“If all the affected states will adopt the measure, there will be very high chances that peace will return in all parts of our country,” he said.