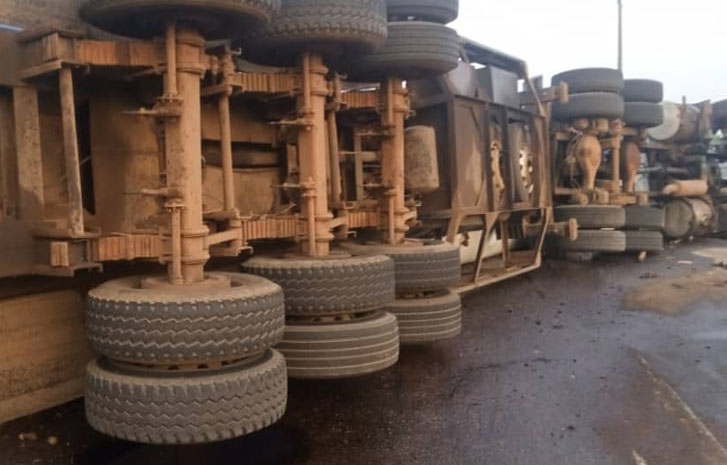 …As FRSC impounds 35 vehicles in Lagos, over absence of speed governors***

The Police Command in Niger says 23 persons lost their lives when a truck fully loaded with dozens of cows and 45 persons, skidded off the road and somersaulted into a bush.

The accident occurred at about 0500 hours along Bokani -Makera road in Mokwa Local Government Area of the state, according to the Commissioner of Police, Mr Adamu Usman, who confirmed the accident to newsmen in Minna, on Monday.

Usman said the truck, with registration Number BBJ 666 XA, was coming from Dadin Kowa, in Kebbi state, enroute to Lagos when the incident occurred, explaining that the corpses of the deceased, and the other 22 who sustained various degree of injuries, had been conveyed to the Mokwa General Hospital for postmortem and treatment respectively.

Usman, who attributed the accident to loss of control by the driver, lamented the failure of drivers to obey traffic rules and regulations.

In the meantime,  the Lagos State Sector Commander of the Federal Roads Safety Corps (FRSC), Mr Olusegun Ogungbemide, said that 35 commercial motorists had their vehicles impounded on Monday in Lagos for not installing speed limit devices in them.

Ogungbemide made the disclosure after the corps sensitized motorists plying the Lagos-Ibadan expressway on the need to install “speed governors’’ in their vehicles.

He said the operation was in line with the directive of the Corps Marshal, Dr Boboye Oyeyemi, who had noticed an increase in the number of fatalities during the festive period.

“We are not going to release those vehicles even after the payment of fines by their owners until they install speed limit devices in them,’’ he said.

Ogungbemide urged motorists to be more careful on the road, obey all traffic rules and comply with Covid-19 protocols.

He cautioned against making the transportation sector an agent in the spread of Covid-19.

The Lagos State Coordinator, Special Marshals, Mr Sola Olojede, said a total of 100 of his colleagues participated in the enforcement of the speed limit.

He pleaded with motorists not to over-speed and to observe all traffic rules.