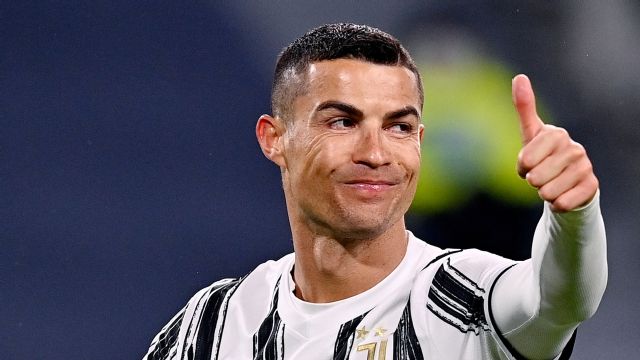 Cristiano Ronaldo scored twice and created another goal as Juventus got back to winning ways in Serie A with a 4-1 victory over Udinese in Turin on Sunday.

The result moved the Italian champions up to fifth in the standings.

Ronaldo opened the scoring with a trademark drive, after latching on to Aaron Ramsey’s pass, in the 31st minute.

He then threaded a perfect through ball into the path of Federico Chiesa to score Juve’s second goal four minutes into the second half.

However, the VAR had a busy evening in Turin.

First, the referee was asked to consult the pitch-side monitor before ruling out what Udinese thought was the opener for a handball early on.

Juventus’ Aaron Ramsey also suffered the same fate when he was penalised for handball, after a second look.

Ronaldo’s second goal put the result beyond any doubt as he took his goal tally to 14 league goals for the season — two more than anyone else in Serie A — in the 70th minute.

There was still time for Paulo Dybala to score another goal for Juventus as Andrea Pirlo’s side moved 10 points behind leaders AC Milan, with a game in hand.

Udinese dropped to 13th and are without a win in their last four games.

In the meantime, FC Barcelona edged La Liga’s basement club Huesca 1-0 on Sunday courtesy of a Frenkie de Jong goal made by Lionel Messi in the Argentine’s 500th league appearance for the club.

Dutch midfielder De Jong arrived at the far post to meet a Messi cross and score on the volley in the 27th minute to deservedly give the visitors the lead after a rampant start.

But Ronald Koeman’s side failed to take their many other chances and in the end were made to sweat for all three points.

Huesca could have levelled in the second half.

This was when the ball trickled across FC Barcelona ‘s area and striker Rafa Mir directed a backheel at goal.

But the shot lacked power and goalkeeper Marc-Andre Ter Stegen made the save in spite of seeing the ball late.