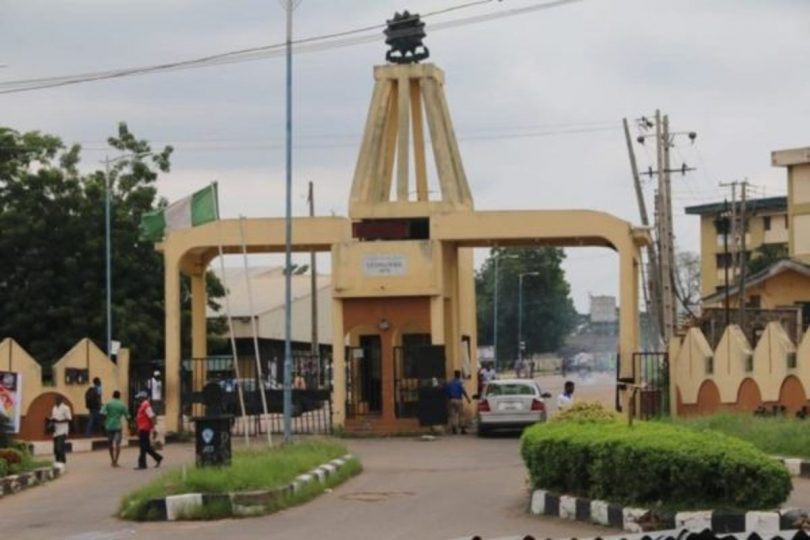 The workers’ unions of The Polytechnic, Ibadan, have started an indefinite strike to press for the implementation of the new national minimum wage introduced by the Federal Government in 2019.

The unions, which comprise of Senior Staff Association of Nigeria Polytechnics (SSANIP) and the Non-Academic Staff Union of Polytechnics (NASUP) announced the industrial action after a joint congress held on Monday.

At the time of filing this report, students were seen milling around at the main entrance of the institution with the hope that the school’s gate would be opened.

The academic activities of the institution after the Christmas break was scheduled to resume on Monday with the start of first semester examinations for the 2019/2020 session, but was disrupted by the protest by the unions.

Mr Biodun Abegunde, the SSANIP Chairman, The Polytechnic, Ibadan, told journalists that the unions were forced to embark on industrial action because the matter was beyond the school’s management and needs to be addressed urgently.

Abegunde had said the unions were demanding for the implementation of the new minimum wage and the removal of a consultant in charge of the school finances to give room to financial autonomy for the institution.

“The unions are agitating for the implementation of the minimum wage and the removal of a consultant who has been handling and managing the financial affairs of the institution.

“This is a move towards financial autonomy. So the unions are clamoring for removal of the consultant so that due process can be maintained by the institution.

“We want the institution to have powers to manage its affairs. The current mode of operation is affecting the smooth running and operation of the institution and the entire community of The Polytechnic, Ibadan, are not happy.

“We want the council of the institution to be the ones running the affairs of The Polytechnic, Ibadan, ” Abegunde said.

When contacted for the reaction of the institution‘s management, the Public Relations Officer, Alhaji Soladoye Adewole, said that the Registrar, Mrs Modupe Theresa Fawole, would issue a statement before the close of work today.

In the meantime,  three thousand, five hundred and fifty-two primary school teachers in Oyo State have completed a week-long training to enhance their competence in the new session.

He said the training was conducted under its OyoSUBEB’s Teachers’ Professional Development Programme.

Adeniran said that the training which started on Jan. 4 was to herald the new academic session and to enhance the teachers’ capacity and efficiency.

According to him, the training will enable the teachers to provide quality education at the primary school levels.

“The Teachers’ Professional Development Programme is an education reform that is poised at developing highly skilled teachers through training, supporting and motivating existing government educators to succeed in their duties.

“At the Oyo State Universal Basic Education Board, we believe every child has the right to be properly trained; this is why we are training the trainers,’’ he said.

“We intend to achieve this through regular training of our teachers. We will leave no stone unturned in the training of these little ones so that they may not pose any threat to our society in the future,’’ he said.

The SUBEB boss reiterated government’s commitment to create the needed enablement for pupils and teachers to enhance their cognitive skills.

He further said that plans were underway to rehabilitate dilapidated school buildings and to add more infrastructures.

Public and private schools in Oyo State resumed for the new academic session on Monday under strict compliance to COVID-19 safety guidelines.

The News Agency of Nigeria (NAN) reports that some of the schools within the Ibadan metropolis did not hold the usual morning assembly.

Also, a minimum of two teachers were seen at the entrance checking pupils’ and students’ temperature with the digital thermometer.

The schools also ensured that students wore facemasks and washed their hands at the school entrance.

Some of the teachers told the newsmen that the state government had advised schools on strict compliance with COVID-19 safety protocols, hence the cancellation of the assembly usually held early in the morning.