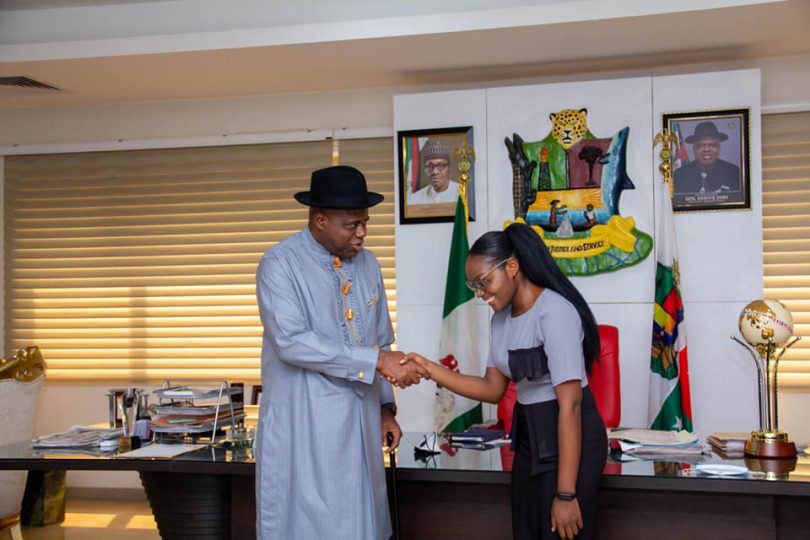 …Names her the new face of Bayelsa Girl Child***

Bayelsa Governor, Douye Diri, on Monday, announced automatic scholarship to Barr. Ebizi Blessing Eradiri for her Master’s and Doctorate degrees in any university in Nigeria or abroad.

Miss Eradiri is the first female First-Class graduate from the Faculty of Law of the state-owned Niger Delta University (NDU), a feat she repeated at the Nigerian Law School.

This indication is contained in a statement sent to newsmen by the Chief Press Secretary to the Governor, Mr Daniel Alabrah.

According to the statement, the governor also offered Miss Eradiri automatic employment to lecture at the NDU Facility of Law after her further studies.

It said the governor made the offer of employment while formally receiving the young lawyer and her father, Mr. Boloupaye Eradiri, at the Government House, Yenagoa.

Diri assured her of the state government’s support in advancing her educational career in any university of her choice anywhere in the world.

His words: “I hereby announce an automatic scholarship for Barr. Eradiri’s Master’s and Doctorate degrees, which will not be restricted to Nigerian universities but any university in any part of the world.

“As a Visitor to the NDU, I also direct that she be given automatic employment to lecture.

“You have the support of your family and your government to fly higher because what you have achieved is just the beginning,” he said.

Diri, who also named Miss Eradiri as the New Face of the Bayelsa Girl Child, said the gesture is aimed at making her a role model for young girls in the state and the entire Ijaw nation to emulate. The governor allegedly, earlier picked a reality show Bayelsa indigene as youth model, and got serious social media bashing.

He equally dismissed speculations, particularly in the social media, about his government’s choice of honouring Miss Nengi Hampson of the last edition of Big Brother Naija fame while refusing to recognise Eradiri as blatant lies.

“Today has brought to an end speculations, especially in the new media, about our refusal to honour Barr. Eradiri while we have honoured Nengi of the Big Brother Naija fame. This is a blatant lie.

“It is unfortunate that everything has to be politicised. For us, education is our number one priority.

Diri, who expressed concern about politicisation of issues in the state, however, assured that his administration’s investments in the educational sector would remain a priority.

Describing Eradiri as an exceedingly brilliant and rising star, the governor congratulated her for making history in bagging first class honours not only at the NDU but also at the Nigerian Law School.

He also sought the Federal Government assistance towards the young lawyer’s development beyond what the state government can offer to enable her add value not only to her state but also to the entire country.

In his remarks, the Ibenanaowei of Ekpetiama Clan, Bubaraye Dakolo, said they were proud of the breakthroughs achieved by their daughter from primary to the tertiary level, saying that she deserved to be encouraged.

Dakolo, who described Eradiri as exceptionally good, said she had won over 50 laurels during her primary and tertiary education.

“Today, we are presenting to you Barr. Eradiri. She collected every single prize that there was from her primary, secondary and university days,” he said.

Dakolo, who stressed that Eradiri deserves support both from the state and federal governments, however, announced the passage of her mother, Mrs Rose Eradiri, last week Tuesday.

In her brief remarks, Miss Eradiri expressed gratitude to the governor for the honour done to her, attributing her success to God and her exposure to good educational infrastructure.

The high point of the event was a minute silence in honour of late Mrs Eradiri.