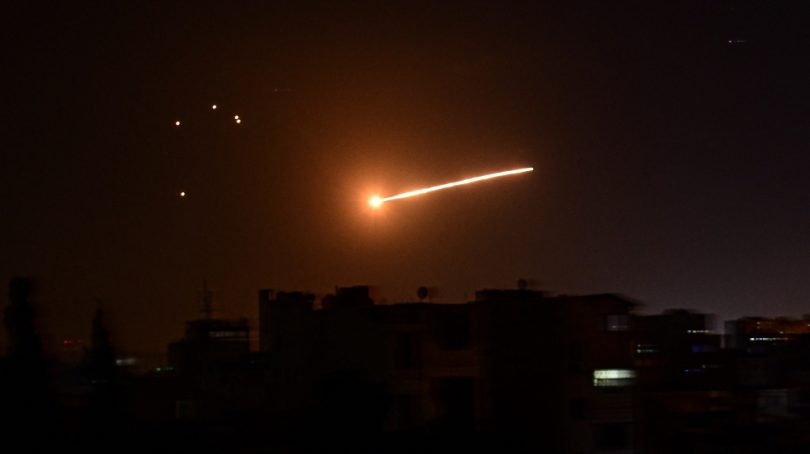 …As Iran launches missile drill amid rising tensions with U.S.***

At least 23 pro-government fighters were killed by a fresh Israeli missile strike in eastern Syria after midnight, a war monitor reported on Wednesday.

The “intense” missile strike targeted positions of Syrian forces and allied Iranian-backed fighters in the area extending from the city of Deir al-Zour to the al-Bukamal area on the Syrian-Iraqi border.

”Seven of those killed were Syrians while the rest are Iranian-backed fighters, said the Syrian Observatory for Human Rights, a UK-based watchdog group said.

It noted that the death toll could likely rise due to the number of critically wounded fighters.

It’s the second strike to target Syrian sites in 2021.

According to the Observatory, Israel had carried out a total of 39 attacks on Syrian military sites in 2020 alone, which killed 217 Syrian soldiers and pro-Iran fighters.

In the meantime, Iran’s military on Wednesday launched a short-range naval missile drill, Iranian state TV reported, at a time of high tension between arch-foes Tehran and Washington.

Iran has one of the biggest missile programmes in the Middle East, regarding such weapons as an important deterrent and retaliatory force against U.S. and other adversaries in the event of war.

The West sees Iran’s missiles both as a conventional military threat to regional stability and a possible delivery mechanism for nuclear weapons should Tehran develop them.

The Iranian-made warship Makran, which state media described as Iran’s biggest warship with a helicopter pad, and a missile-launching ship called Zereh (armour) took part in the two-day Gulf of Oman exercise.

Tensions between the United States and Iran have risen since 2018, when President Donald Trump abandoned the 2015 nuclear deal.

In recent years, there have been periodic confrontations between Iran’s military and U.S. forces in the Gulf, where Tehran holds annual exercises to display her military might to confront “foreign threats”.

Iran’s action was in response to Iranian funds frozen in South Korean banks due to the  U.S. sanctions.

This followed the interception of an Iranian tanker by a British warship off the coast of Gibraltar two weeks earlier.

Xinhua with additional report from Reuters