Following the restoration of law and order on all roads leading to the Lagos Ports and those within the Lagos Port Maritime logistic Corridor, the Presidential Task Team on Apapa Gridlock has now handed over traffic management to the Lagos State government.

The Presidential Task Team on the restoration of Law and Order in Apapa confirmed this in a statement made available to newsmen in Abuja, by the PTT former Executive Vice Chairman, Comrade (Dr.) Kayode Opeifa, noting also, the removal of all stationary trucks on Lagos roads leading to the Ports.

“After weeks of careful planning, I am pleased to announce that the presidential task team charged with the responsibility of Restoration of Law and Order on Lagos roads leading to Apapa and around Lagos Port and Maritime Logistics Corridor has successfully handed over its activities to the LASG to be supported by the Lagos State Police Command”, Dr. Opeifa stated, noting the positive multiplier effects on road congestion, haulage and cost of doing business in Lagos ports.

It would be recalled that President Muhammadu Buhari inaugurated the task force, chaired by the Vice President, with Comrade Kayode Opeifa as the Executive Vice Chairman on April 25th, 2019.

“Following the restoration of relative normalcy on the axis with a massive reduction in congestion and traffic, the task force completed its task and decided to withdraw on October 7, 2020”.

“A report of the activities of the Team was presented to the Presidency on the 7th of October, 2020 at a meeting Chaired by His Excellency the Vice President Prof. Yemi Osinbajo and in attendance; the HMoT, HE Rotimi Amaechi; the HMWH HE Babatunde Raji Fashola; CG Customs Col Hameed Ali (Rtd); MD NPA, Hadiza Bala-Usman; ES NSC, Barister Hassan Bello; FRSC Corp Marshal, Boboye Oyeyemi; DCOS to the President Mr. Ade Ipaye and the SSA to the President on Media.

“The handover process started on November 8, 2020 and was officially completed on December 29, 2020”, the former Vice Chairman stated, highlighting few recommendations that if followed, would ensure total elimination of gridlock on Lagos ports roads, in future.

“As a result of the activities and efforts of the Team – made up of Representatives of the Inspector General of Police, Lagos State Government, NPA, NSC, PEBEC, FRSC, FMWH, Dry Cargo Truckers, Wet Cargo Truckers, Apapa residents and Local Government and NUPENG/PTD union, the following outcomes were recorded.

“Development and deployment of an efficient and effective Traffic management plan for the entire port area traffic (including the cargo, fuel distribution and business district traffic). Traffic Management Direction as contained in the Presidential Task Team released Operational Order, Guidelines and Modus Operandi which incorporates Port Operations, Incident rescue management, Truck Throughput and Park Management and special purpose Apapa Port Area Traffic Management with strict enforcement protocols; the current operating system backed by appropriate enforcement has the capacity to clean up any congestion within two to six hours with the cooperation of major stakeholders and an effective incidence and recovery management system by LASTMA and LRU. 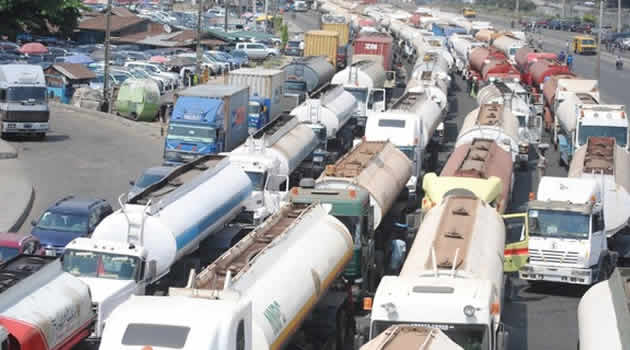 Apapa gridlock before PTT was established

“Development and Deployment of a Manual Call Up system pending the introduction of an electronic system by the NPA. The system incorporated into the Traffic management plan envisaged trucks are called from Nominated Parks into Transit Parks (Lilypond and Tincan Island Transit Truck Parks) for call up into the Ports.

“Working with NPA and the NSC developed and deployed a workable Empty Container Return Handling Policy to handle cempty containers.

“A reduction in the cost of Port Cargo Haulage from the Ports to different parts of the country.