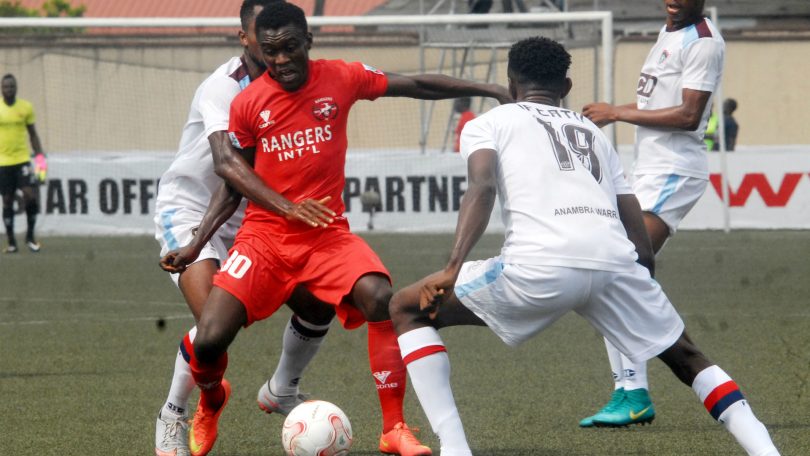 Rangers, therefore, moved up behind Rivers United of Port Harcourt after four matches played in the competition.

They are level on nine points with Rivers United, but they have an inferior goal difference of two.

Israel Abia put the home team in front in the 12th minute from a penalty kick and Ekene Awazie drew the visiting side level in the 51st minute.

Shedrack Asoegbu made it 2-1 for Rangers in the 56th minute with what turned out to be the match-winning goal.

Speaking after the match, the Rangers’ Head Coach, Salisu Yusuf, praised the players for adhering to instructions.

Yusuf acknowledged that the visitors gave his players a tough time and made the game difficult for his players.

“FC IfeanyiUbah came at us with determination, but we were able to subdue them because the players needed the points to be in a better position on the log.”

The coach gave credit to the visiting team’s goalkeeper, saying that he was his team’s main competitor on the day.

FC IfeanyiUbah’s coach, Uche Okagbue, on his part said his team fought like wounded lions but lost concentration after they equalised.

The coach however said he was beginning to be worried of his team’s failure to win any match so far in the ongoing league.

“We changed tactics after the first 45 minutes and that was what fetched us the equalising goal.

“Had it been that we beat Rangers, the players would have regained confidence for our forthcoming matches.

“As it stands now, we are going home to work more on our playing tactics to ensure we turn the situation around,” he said.

In another development, Manchester City moved to within four points of the Premier League summit as Phil Foden’s goal earned them a nervy 1-0 victory over struggling Brighton & Hove Albion on Wednesday.

Foden’s clinical finish just before halftime on a wet night at the Etihad Stadium proved enough for City to claim a fourth successive league win, but it was far from comfortable.

City had chances in the second half to stretch their lead with keeper Robert Sanchez and the woodwork coming to Brighton’s rescue but the visitors finished strongly.

The hosts could have eased the tension in stoppage time, but substitute Raheem Sterling blazed a penalty over the crossbar.

City held on, however, to move into the top four with 32 points from 16 games, four behind leaders Manchester United and one behind champions Liverpool having played one matchless.