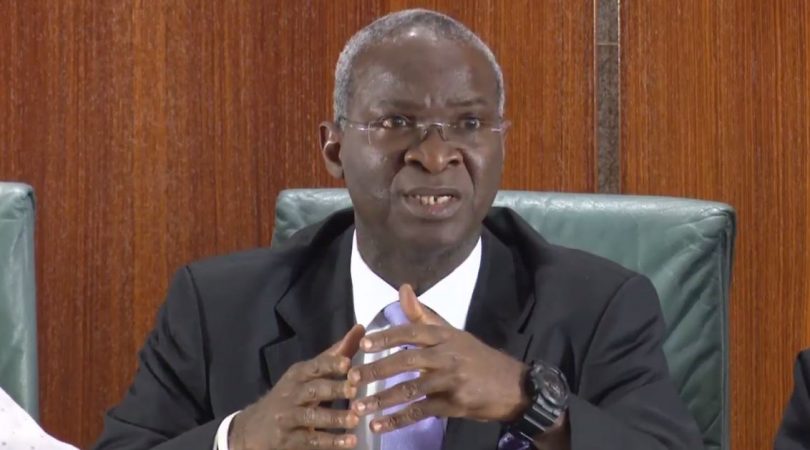 The Minister of Works and Housing, Mr Babatunde Fashola on Thursday reaffirmed the Federal Government’s commitment to the speedy completion and reopening of the Third Mainland Bridge to traffic on Feb. 15.

Fashola during an inspection of the bridge assessed ongoing construction work as well as the planned diversion shifts on the bridge which will take effect from Friday, Jan. 15 to Feb. 13.

The minister expressed hope that work on the bridge would be completed and reopened to traffic on Feb. 15 to enable the government to begin work on the Falomo Bridge.

He explained that work on the Falomo Bridge was being delayed to avert the gridlock that may ensue.

“On Third Mainland Bridge most of our work is almost done, we lost two weeks during the civil protest and our completion date earlier was towards the end of January, that has slipped.

“We are hoping that by 15th of February we should be done and the bridge should be opened to the public.

“That is one of the reasons why I also came to see how far and when this bridge will be opened to the public because this is delaying our work on Falomo Bridge.

“We have done some work on Falomo Bridge, we are going to have to close Falomo Bridge as soon as this is done so that we can also replace the expansion joints there.

“All the other preliminary work has been done there, but we left it in order to reduce the inconvenience to commuters in and around Lagos.

“So, the Eko Bridge that was closed is opened now, this one (Third Mainland Bridge) is going to be opened by Feb. 15,’’ he said.

The minister added that the closure of the Falomo Bridge will happen in consultation with the Lagos State Government.

The Director, Bridges and Designs, Mr Emmanuel Adeoye, said that a trailer had fallen and burst into flame on May 1, 2020, damaging the concrete and Piers of the Obalende bridge linking Dodan Barracks.

“Now we have worked on the bridge and have done jacketing of the piers and as you can see everything has been well done,’’ Adeoye said.

Also, the Federal Controller of Works in Lagos, Mr Olukayode Popoola also shed some light on the ongoing rehabilitation works on the outer Marina Road on Lagos Island.

Popoola said that work had been completed on three kilometres to asphalt level out of the ongoing rehabilitation works on eight kilometres.

The Third Mainland Bridge in Lagos, which was going through series of repairs, had to be partially shut on July 24 for another round of rehabilitation works.

The federal government had earlier debunked various claims of total shutdown of the Third Mainland Bridge and explained new diversion shifts by two kilometres for repairs.

Traffic was partially diverted on a stretch of 3.5km where construction is ongoing between Adeniji Adeniji Ramp and Ebute Meta, while different time belts were allotted for traffic diversions on the bridge.

The 11.8km bridge is the longest of the three bridges connecting Lagos Island to the Mainland.

The bridge starts from Oworonshoki, which is linked to the Apapa-Oshodi Expressway and the Lagos-Ibadan Expressway and ends at the Adeniji Adele Interchange on Lagos Island.

Constructed in 1990, the bridge was adjudged as the longest in Africa until 1996 when the Oct. 6 Bridge in Cairo, Egypt was completed.