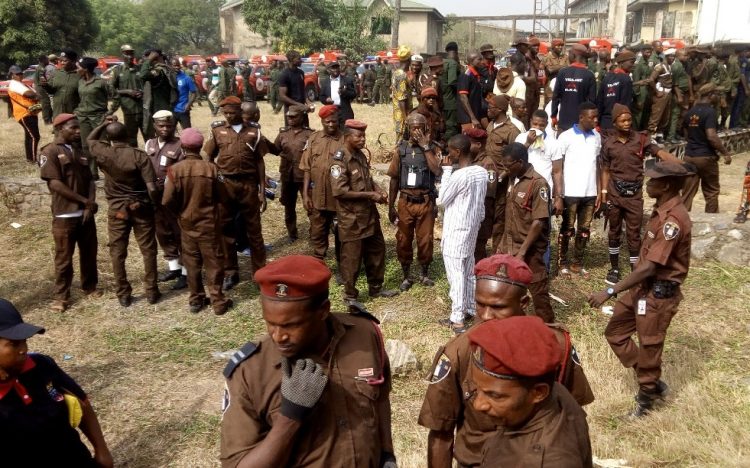 A commercial motorcyclist was on Wednesday night reportedly killed in Ibadan by a stray bullet allegedly from a gun shot by an operative of the recently created state Security Network Agency, Amotekun Corps.

The Amotekun operatives it was learnt were on patrol around the Mokola area of Ibadan at 11 p.m. when a gun shot was heard allegedly hitting the motorcyclist, identified as Tosin Thomas.

An eye witness said Thomas, 21, was rushed to hospital for treatment, but later died in the early hours of Thursday.

The witness said that the deceased was not on his bike, but was walking in the area when he was hit by stray bullet.

Consequently, there was a protest around Mokola roundabout area of Ibadan on Thursday morning by motorcycle operators, who carried the corpse of the deceased around Mokola area, before dumping the corpse in the middle of the road.

The Police Public Relations Officer (PPRO) in the state, CSP Olugbenga Fadeyi, confirmed the incident on Thursday in Ibadan.

Fadeyi said that a report was received on Thursday by 9:10am from one Alamu Timothy at the Mokola Police station that 21-year-old Tosin Thomas of Ode-Olo area, Ibadan, was hit by bullet fired by Amotekun operatives around Mokola Total filing station at about 11:30 pm.

Fadeyi said that the victim was rushed to University College Hospital (UCH), Ibadan, for immediate medical attention, but was later confirmed dead.

The PPRO said that investigation had commenced into the matter and normalcy had been restored to the area.

In another development, a suspected thief was set ablaze by a mob around Leventis area of Ibadan on Thursday morning.

“There was a mob attack on a guy who was accused of stealing and later set ablaze before the arrival of the Police.

“Immediately I got the information, I called the DPO in charge of the area, but before the arrival of the police patrol team at the scene, the suspect had been set ablaze.

”I will get back to you on the update of what actually happened,” Fadeyi further said.