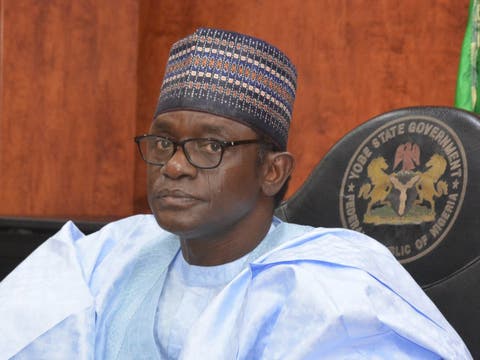 Buni disclosed this at the presentation of a report on ‘Almajiri System of Education and Strategic Plan’ in Damaturu on Thursday.

“A total of 12,042 students were registered for WAEC out of which 725 students scored distinctions and credits in all the nine subjects.

“We also have 2,530 students who scored distinctions and credits in five subjects and above including English and Mathematics.

The governor described the development as unprecedented, very impressive and encouraging.

“It also shows that we are on course and the declaration of emergency on education is worthwhile and paying,’’ he said.

Buni further highlighted improvements in Qur’anic education in the state.

“A total of 3,838 schools comprising boarding, day and satellite or ‘Ci-Rani Tsangaya’ schools recorded enrolment of 180,371 Almajiri pupils in the state,” he said.

Buni reiterated his administration’s commitment to do more in the education sector of the state.

“I wish to reassure you that the government will continue to work on measures that will consolidate our drive toward salvaging education to fast track meaningful development in the state,’’ he said.

The Governor on May 29, 2019, declared a state of emergency on basic and secondary education. in the state.

In another development, the Federal Government on Thursday urged Nigerians to disregard the news circulating on social media that it was contemplating another lockdown.

Mr Boss Mustapha, Secretary to the Government of the Federation (SGF), also Chairman, Presidential Task Force (PTF) on COVID-19, made the clarification in a statement signed by Mr Willie Bassey, Director Information in his office.

Mustapha also advised Nigerians to join hands with the Federal Government to contain the spread of the virus by adhering to Non-Pharmaceutical Interventions (NPI’s) as recommended by PTF.

“The attention of the Presidential Task Force on COVID-19 has been drawn to some misinformation circulating on the social media to the effect that the Federal Government is contemplating another lockdown this weekend.

“The PTF wishes to state categorically that there is no such consideration at any of its meetings, nor has any recommendation been made to this effect to the President.

“The PTF frowns at such unpatriotic misinformation which is capable of causing unnecessary panic and anxiety among the populace,” he said in the statement