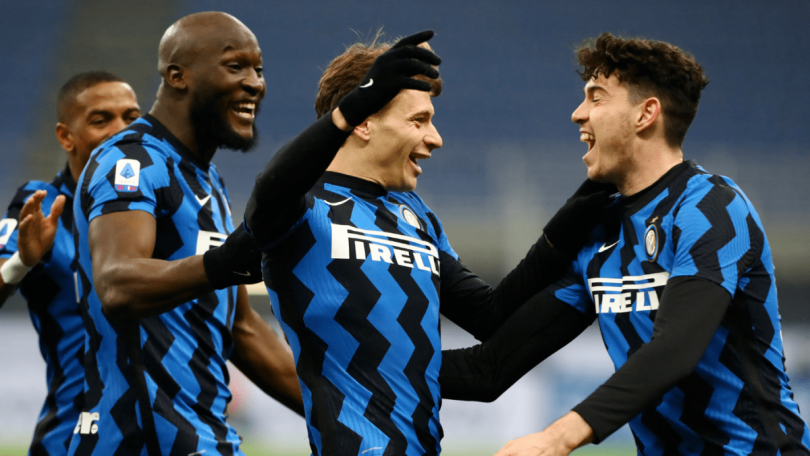 Juventus are fifth with a game in hand and stayed seven points off the top, with AC Milan hoping to reclaim first place when they close Match Day 18 at Cagliari on Monday.

Inter Milan were one goal up at half time, thanks to a header from ex-Juve midfielder Arturo Vidal.

The former FC Barcelona player connected with Nicolo Barella’s cross on 12 minutes to net his first goal in the season.

The hosts also came close when Lautaro Martinez missed a tap in after Romelu Lukaku was denied by Wojciech Szczesny.

Juve lacked the speed to threaten the tight Nerazzurri defence and conceded again on 52 minutes, when Alessandro Bastoni sent Barella storming from the midfield to struck under the bar.

“[The goal] was important for me and for the team,” said Vidal, who won the first four in Juve’s record run of nine Scudetti. “We won a difficult game against the strongest team in Italy.

“We showed that we are fit to battle for the title. Wins like these give you the confidence to continue on, but we have to keep working everyday.”

The fast, diminutive Insigne struck clinically on five minutes and was unstoppable when he raced down the left flank to square for the third goal from Hirving Lozano.

Napoli’s other striker Andrea Petagna set up Insigne’s opener and also crossed for the second goal scored by Diego Demme.

Piotr Zielinski fired in off the left post to effectively wrap up matters by half time, and Insigne then converted a penalty kick before a late effort from substitute Matteo Politano.

“I am happy because as a Neapolitan it’s important to reach goals while wearing this shirt,” the Naples-born Insigne said. “But I am happier still about the win because we played as a team with a great performance.

“We made some mistakes in previous games but the good thing is that every three days you have a chance to bounce back.”

Napoli have a game in hand against Juventus and sit six points behind AC Milan.

In Bergamo, Atalanta were held to a 0-0 draw against lowly visitors Genoa, staying sixth one point behind Juventus.

The Bergamaschi also have a game in hand.

Elsewhere, Sassuolo salvaged a 1-1 draw against second-last Parma, thanks to a stoppage-time penalty kick.

Crotone stayed last in spite of beating Benevento 4-1 with a brace from Nigerian striker Simy.

Benevento had Marco Sau red-carded for his protests after the hosts’ fourth goal.