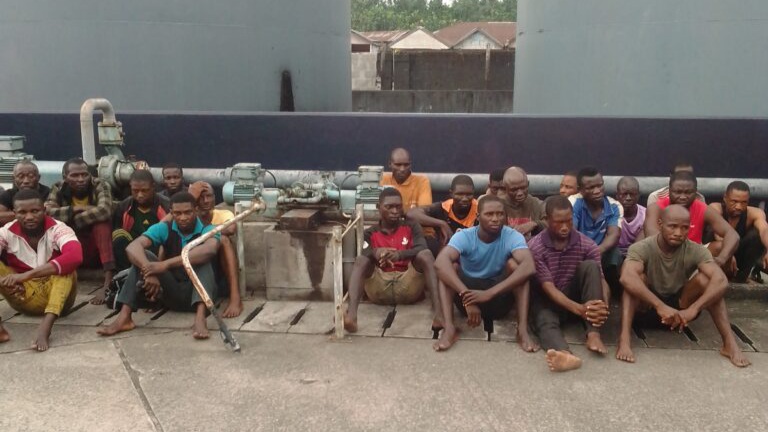 The Nigerian Navy, Forward Operating Base (FOB), Igbokoda, on Sunday, said no fewer than 24 suspected illegal oil thieves were arrested on the coastal waters in Ilaje Local Government Area (LGA) of Ondo State.

Navy Capt. Shuaibu Muhammed-Ahmed, the Commanding Officer, FOB, parading the suspects in Igbokoda, told newsmen that the men were apprehended on Jan. 13 at 4.00pm during the Navy personnel’s routine patrol on Ondo-Lagos open sea channel.

Muhammed-Ahmed said that the arrest was in fulfillment of the navy’s mandate to combat all forms of illegalities in the maritime environment.

He listed the seized items to include: one firbre boat containing 150 drums of 250 litres capacity each of products suspected to be illegally refined AGO (diesel), one pumping machine, 90 Horse Power (HP) and 80HP Yamaha outboard engines respectively.

In a related development, the Ekiti Government, on Sunday said it was not taking anything to chance in 2021 addressing the growing insecurity in the state, particularly kidnapping.

It therefore voted N1.4billion for the State Security Network, codenamed Amotekun Corps, in its 2021 budget.

The Commissioner for Budget, Mr Femi Ajayi made this known at a press conference in Ado Ekiti where he gave the detailed analysis of the N109.666 budget passed by the state legislative and recently assented to by Gov. Kayode Fayemi.

He recalled that Fayemi had on Dec. 23, 2020, assented to the budgetary provision, christened “Budget of Recovery and Economic Restoration”, comprising N58. 4 billion for recurrent and N51.6 billion for capital expenditures .

Ajayi said that the priority to security was in a bid to further attract investment and ensure safety of all investors and residents.

”Following the incessant security challenges which include kidnapping, herders/farmers clashes, robberies in the country, to ensure the security of lives and properties, Governor Kayode Fayemi inaugurated the Ekiti State Security Trust Fund coined ‘Amotekun’ in collaboration with other South-Western States on 19th October, 2020.

He said that government had also earmarked a total of N8 billion to critical areas of social services, to include the education sector, health, gender empowerment, social security and other pivotal sub-sectors critical to the growth of the state’s economy.

To fund the budget, Ajayi said that a total of N29.6 billion was expected from the federation account, N8.4 billion raised from Internally Generated revenue including taxes and other fees while N4.5 billion would be generated from tertiary institutions, including other sundry sources.

The Commissioner stated that the budget was tailored towards resetting the economy to rise to COVID-19 challenges and open a new vista in the fight against poverty, engendering of industrial growth and agribusiness.

He said a sum of N2.4 billion had been budgeted to start off the recently approved Bamidele Olumilua University of Education Science and Technology while a total of N677million was earmarked for the new school of Commercial Agriculture, Isan Ekiti.

Ajayi said that in consideration for human capital development and equality of all genders, the state proposed to hold a Gender Summit and N35 million had been budgeted for the project.

The commissioner also said that N20 million would be spent on construction of a Family Court to attend to family issues,” timeously”.

On urban renewal development, Ajayi said a sum of N250 million was to be expended on the Master Plan of Ado Ekiti and Satellite Towns while a sum of N4.5 million would be spent on ecological programme called NEWMAP.