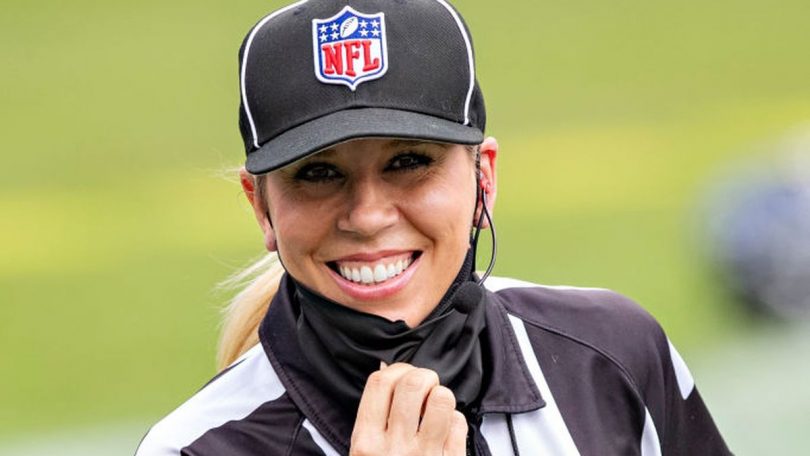 “Her elite performance and commitment to excellence has earned her the right to officiate the Super Bowl. Congratulations to Sarah on this well-deserved honour.”

Thomas is at the end of her sixth season in the league and will be one of seven officials for the championship game on Feb. 7 in Tampa Bay.

On Sunday it will be determined which two teams will face off.

The Super Bowl is the annual championship game of the National Football League (NFL) in the U.S. and has always been played on the first Sunday in February.

In another development, Leicester City claimed top spot in the ongoing 2020/2021 English Premier League (EPL) on Tuesday with a 2-0 win against Chelsea at the King Power Stadium.

Wilfred Ndidi fired the hosts in front after six minutes and James Maddison added the second four minutes before half time to secure the triumph.

Leicester City, shock champions in 2016, are now ahead of previous leaders Manchester United by one point with a total of 38, while Chelsea have slipped to eighth on 29 points.

Manchester United have a game in hand on Leicester City while Manchester City are third, three points behind the leaders having played two matches less.

Leicester City manager Brendan Rodgers played down their position by saying it’s “too early” to call them title contenders.

“No one is jumping through hoops, but it shows in the first part of the season consistency has been good and performance levels have been very high,” Rodgers said.

“We looked very dangerous in the game. Two very good goals. We really deserved it.”

Jarrod Bowen put the Hammers ahead on the stroke of half time when he directed Vladimir Coufal’s cross into the net with his chest.

Matheus Pereira leveled early in the second half with a long range strike but Antonio sealed the win on 66 minutes with a close-range volley.

On West Brom’s side, the club could be investigated by the Premier League after not bringing Robert Snodgrass to play against his former side.

Snodgrass made the switch from West Ham earlier this month and made his West Brom debut in the 3-2 win against Wolves.

Part of Snodgrass’ agreement included a clause where he could not compete against the Hammers, according to West Brom manager Sam Allardyce, but this is against Premier League transfer policy.

“If the Premier League want to know about it they can contact us privately and we will tell them,” West Brom manager Sam Allardyce said.

“It is up to the Premier League to let us know if we have done anything wrong and then I will answer whatever questions they decide to ask me.”

David Moyes’ side are now two points behind a top four place with a tally of 32 points, while West Brom sit second-bottom on 11 points.

“We’re showing some growth in how we play and what we do,” said Moyes.

“I’d like to dream a lot, but we’re very humble and understand we’re West Ham.

“We’re not going to start shouting things too soon because history has shown we haven’t always backed it up and I want to be the one to back it up.”

Chelsea were stunned from the start against Leicester City when Ndidi’s strike from the edge of the penalty box crashed in off the post to put the hosts in charge.

Frank Lampard’s men were given a penalty kick when Jonny Evans tripped Christian Pulisic, but the video assistant referee (VAR) ruled the foul was outside the area.

“I thought it was a penalty kick but I’m not going to lean on those things. We weren’t good enough,” Lampard said.

“Disappointing goal [to lose] from a set-piece and the second goal is just not good enough.”

Leicester City pounced moments after the penalty kick incident when Maddison clipped a half-volley past Chelsea goalkeeper Edouard Mendy to double Chelsea’s misery before the break.

The visitors were all out of luck in the second half and they were thwarted by VAR again in the 85th minute when Timo Werner’s goal was ruled out for offside.

With Chelsea only winning twice from their last eight games, Lampard admitted he is “worried about the slump.”

“It’s a young team and it’s a big lesson,” he added. “You’ve got to get yourself out of the hole.