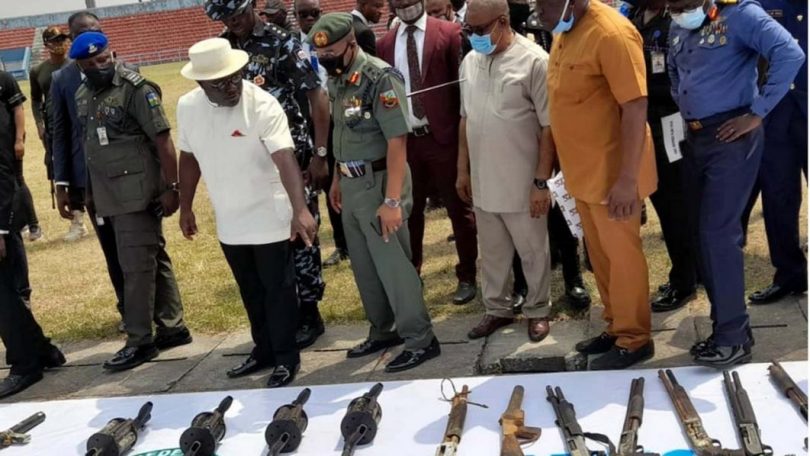 The European Union, Economic Community of West African States (ECOWAS) and the Leadership Initiative for Transformation and Empowerment (LITE Africa) have begun the destruction of 260 arms and 5510 weapons in Calabar.

The arms and weapons were surrendered by ex Bakassi strike force militants and members of cult groups in the state.

Speaking on Monday in Calabar, Gov. Ben Ayade of Cross River, said that the destruction of the arms and weapons would further give residents of the state the desire to work closely with the state government and security agencies.

Ayade, who said there were over 33 illegal routes in the state, lamented that suspected armed smugglers were proliferating the state with arms through the routes.

He commended security agencies in the state for working tirelessly to secure the state in collaboration with the Operation Akpakwu security outfit established by the state government to fight criminality.

Ayade, who carried out the symbolic destruction of the arms, urged those who were yet to surrender their arms to do and embrace peace for the growth of the state.

Mr Joel Bisina of LITE Africa, who spoke on behalf of EU-ECOWAS, said that one cannot underestimate the dangers of illicit proliferation of small arms and light weapons and the negative impact they have on peace and stability in various communities.

Bisina said that small arms and light weapons had continued to have devastating effects on the socio-economic situation in Nigeria and the West African subregion.

“In Nigeria, the commercial transaction in small arms and light weapons has been on the increase since the end of the Nigerian Civil War. The trend has continued despite the illegality of the trade.

“In a bid to promote peace, reduce armed conflict and small arms proliferation in the region, LITE Africa and the Presidential Committee on Small Arms and Light Weapons, with support from the EU/ECOWAS is working to strengthen the efforts at preventing further proliferation and trafficking of illicit arms in Nigeria,” he said.

Mr Dickson Orji, a representative from the Presidential Committee on Small Arms and Light Weapons, said that the committee was set up in 2013 with a mandate to be the focal point in the efforts by Nigeria to stem the tide of the proliferation of illicit arms.

Orji said that the Nigerian component of the EU-ECOWAS small arms under the current pilot phase focuses in the seven states of Kaduna, Katsina, Kebbi, Sokoto, Zamfara, Cross River and Akwa Ibom.

Mr Austin Ibok, Special Adviser to Ayade on Amnesty and Rehabilitation, said that 150 ex-militants who have surrendered their weapons would undergo skills acquisition training under the EU-ECOWAS sponsorship.

Ibok said that the move was aimed at reducing youth restiveness through civic engagements and reducing the crime rate in the state to the barest minimum.

The newsmen report that heads of the Police, Navy, Air Force, Army and Security Advisers in the state were present at the event.