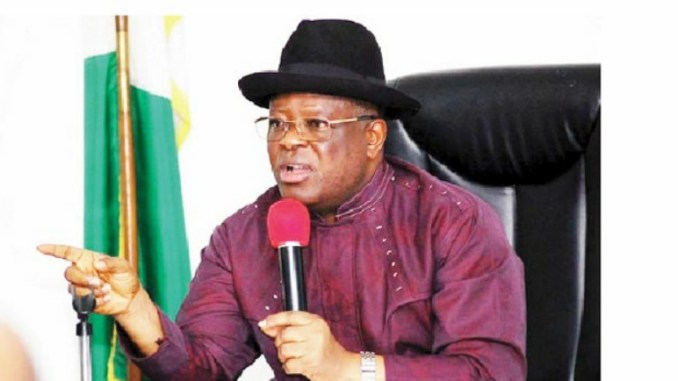 …As Uzodinma declares dusk to dawn curfew in 10 LGAs, in Imo***

Gov. David Umahi of Ebonyi has ordered the arrest and prosecution of culprits linked to the communal crisis which resulted in the death of at least, eight persons, involving Effium, Ezza Effium indigenes of Ohaukwu Local Government Area of the state.

This is even as Gov. Hope Uzodinma of Imo imposed dusk to dawn curfew in 10 council areas in Imo to check further breakdown of laws in Orlu Local Government and other affected areas.

The police have so far confirmed eight deaths, over 60 persons arrested and burning of over eight houses in the crisis which emanated from a leadership dispute at the area’s motor park.

Umahi made the declaration on Monday at Effium during a tour of the community.

The governor said that even government officials involved in the carnage would not be spared.

He said that he would not release any stakeholder already in detention as a result of the crisis as he was in touch with security agencies over investigations into the matter.

“The state’s attorney general must procure a court order stipulating that they can only be released on my instruction.

“A judicial panel of inquiry should also be constituted over the matter as I would order their release when women from both sides confirm that permanent peace has returned to the area,” he said.

He ordered all displaced persons to return to their homes as adequate security had been provided in the area to restore normalcy and protect their lives and property.

“All political appointments and developmental projects being executed in the crisis area should be suspended until permanent peace returns to the area.

Umahi further warned the opposition in the state not to ‘cash into’ the crisis to further heighten tension as anybody who did so would be arrested and prosecuted.

“Opposition is allowed in our government but it must not be fake news and you cannot sit in your homes to cause problems in the state.

“I urge security agencies to go after individuals who peddle fake news to prove their points as this would allow peace return to the society.

“I also order the arrest of Mr Silas Onu, the Peoples Democratic Party (PDP) Caretaker Publicity Secretary, over alleged inflammatory publication on the social media concerning the crisis,” he said.

“I also urge the media not to use its pen to cause or escalate crisis in the state because precious lives are involved,” he said.

Mr Emmanuel Igwe, the Governor’s Special Assistant on Parks Development said that he duly reported the breach of peace at the Effium motor park where the crisis emanated to relevant authorities.

Mr Friday Nwite, a Youth Leader in the community accused some politicians in the area as the arrowhead of the crisis.

In the meantime, Gov. Hope Uzodinma of Imo has imposed dusk to dawn curfew in 10 council areas in Imo to check further breakdown of laws in Orlu Local Government and other affected areas.

The governor said in Owerri on Monday that the curfew would hold between 6pm and 6am daily till further notice.

Some security agencies in Imo and a group known as security volunteers had clashed in Orlu council area on Monday, living one person dead.

A popular timber market known as Ogbosisi Market was set on fire during the crisis which lasted for several hours.

The police spokesman, SP Orlando Ikeokwu, who confirmed the incident, said police had moved into action to restore peace and immediately arrest those behind the incident.

But Uzodinma said, in a press statement signed by his Chief Press Secretary Mr Oguike Nwachukwu, that the curfew would check further breakdown of laws in the area.

The governor also gave a matching order on security agencies to immediately arrest those behind the incident and bring them to book.

He said: “This afternoon, I received very disturbing news about a clash between security agencies and some militants who unleashed shooting in Orlu LGA.

“I am totally sad over this incident which nearly painted a picture of near breakdown of law in the state and I am condemning this act of holiganism and those behind this will regret their actions.

“As an interim measure to check the crises, I have directed a dusk to dawn curfew in 10 LGAs in Orlu zone between 6pm and 6am daily till further notice.

The governor warned that anybody caught within the period of curfew would be treated as a suspect to the crisis.