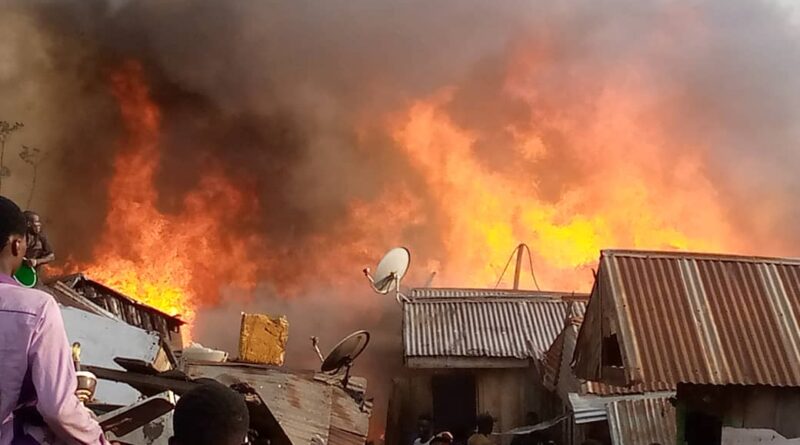 …As Cocoa farmers in Edo seek financial support from govt.***

He added that goods worth millions of Naira were also damaged by the inferno.

According to him, the Agency received distress calls on Tuesday at 1.05 a.m. concerning the fire outbreak in Alade Market.

“We commenced fire suppression activities immediately we arrived at Somolu market and investigation revealed that the fire was likely from a voltage surge when power supply was restored.

“LASEMA firefighters with the Lagos State and Federal Fire Services worked tirelessly to put out the inferno.”

He called on members of the public to ensure that their appliances were switched off when not in use in order to prevent fire outbreak,

He added that the extent of goods destroyed by the fire was still being assessed.

However, Mr Tajudeen Aremu, an eye witness, who was sweeping the market, at the time of the incident, said the fire started few minutes to 1:a.m.

He said he saw the fire coming out from one particular shop and within few minutes it extended to many other shops.

In another development, Cocoa farmers in Edo on Tuesday urged the state government to support the sector financially for the produce to attract foreign exchange.

Mr Thomas Ekpenriebe, the state Chairman, Cocoa Farmers Association, who said this at a news conference in Benin observed that cocoa was the cash crop used to develop the nation in the past.

“Government should make good use of the opportunities in exporting cocoa because the benefits in the sector can boost foreign exchange,” he said.

“Today, there’s nothing coming from the state or Federal Government to support the production of the cash crop.

“We are just working on our own and it is affecting cocoa production generally in the country,’’ Ekpenriebe said,

The chairman criticised the lack of attention and financial support by government at all levels to boost the quality of cocoa production in the country.

He said that at present Edo has the best quality of cocoa owing to concerted efforts by relevant stakeholders.

He also said that the less rain recorded in last season compared with previous years had impact on the harvest.

He identified unfavourable climate, fire outbreak, COVID-19 outbreak and lack of regulatory board as major hindrances in the production of cocoa in the state.

He, however, called for the re-establishment of cocoa board to regulate activities of middlemen in the sector.

“Middlemen have always been there. There is no control unlike when we had cocoa board regulating production so that we can identify licenced buyers.

“But now it is like an independent market,” he noted.

Ekpenriebe added that there was need for the government at all levels to regulate production for the crop to attract more funds.