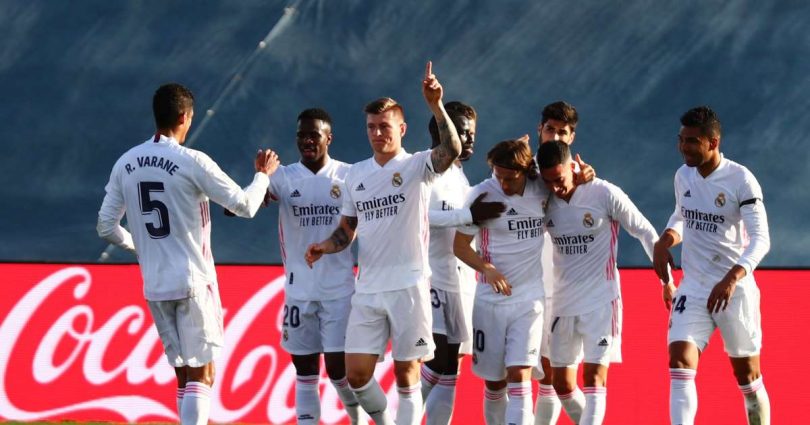 Karim Benzema and Toni Kroos were on target in the first half as Real Madrid easily beat a listless Valencia side 2-0 at home on Sunday to make it three wins in a row in La Liga.

Benzema got Zinedine Zidane’s side off to a strong start in the 12th minute when he collected a pass from Kroos on the edge of the area and fired into the far bottom corner.

Kroos, who missed Tuesday’s win over Getafe through suspension, doubled the lead shortly before halftime, finishing off a flowing move by driving a first-time shot low into the net from the edge of the area.

The victory took Real back into second place on 49 points, five behind leaders Atletico Madrid who beat Granada 2-1 on Saturday and have two games in hand. Valencia are 12th on 24 points.

In another development, Manchester United lost ground in the 2020/2021 English Premier League (EPL) title race as they dropped points in a 1-1 draw at relegation-threatened West Bromwich Albion on Sunday.

Bruno Fernandes equalised Mbaye Diagne’s early goal for second-bottom West Brom, but the home side held on for a draw.

Manchester United are second, above Leicester City on goal difference but still seven points behind Manchester City, who beat Tottenham on Saturday, and having played a game more.

“We should play better but we gave ourselves a tough start,” Manchester United manager Ole Gunnar Solskjaer said.

“You have 90 minutes to make amends, but we didn’t build that momentum until late in the first half.”

Harry Maguire thought he had won a penalty kick for Manchester United but it was overturned after video review.

West Brom then hung on for a point to give their slim survival hopes a boost.

Solskjaer said any talk of Manchester United being in the title race was misplaced.

“I said we shouldn’t be talked about,” he said. “A compliment for the boys we got into position we are now.

“We won’t let them run away with it —— we’re playing them soon. We’re not giving it away early. No, we’re not.”

In another match, Pierre-Emerick Aubameyang scored a hat-trick as Arsenal beat Leeds United 4-2 to go 10th.

Aubemayang grabbed two goals in the first half and after Hector Bellerin added a third on half-time, he completed his hat-trick to make it 4-0 two minutes into the second half.

Though Pascal Struijk and Helder Costa scored in the second half for Leeds United, it was too little too late and they are now one place behind the Gunners.

Southampton suffered a sixth straight league defeat as Wolverhampton Wanderers came from behind to win 2-1 at St Mary’s.

Danny Ings put Southampton ahead with a brilliant volley on 25 minutes, but Ruben Neves levelled from the penalty kick spot after a controversial handball soon after half-time.

Pedro Neto then fired in a superb winner on 66 minutes.

Wolves are now 12th, one point and one place above Southampton.

“We are insisting on getting back to playing good football,” Wolves manager Nuno Espirito Santo said.

“It’s a process we are chasing and it’s a daily one. I’m pleased for today because it’s a step in the right direction.”

“It’s hard to take,” he said. “It was a good game from our side but I cannot understand it (the penalty decision).

“There was no chance for the opponents up to then. My team was shocked at that moment because of the decision. We can discuss about everything but at the moment I cannot think about anything else.

“The rest of the story, let others discuss it. I don’t want to. I’ve seen it two or three times. I cannot understand.”

Reuters with additional report from dpa