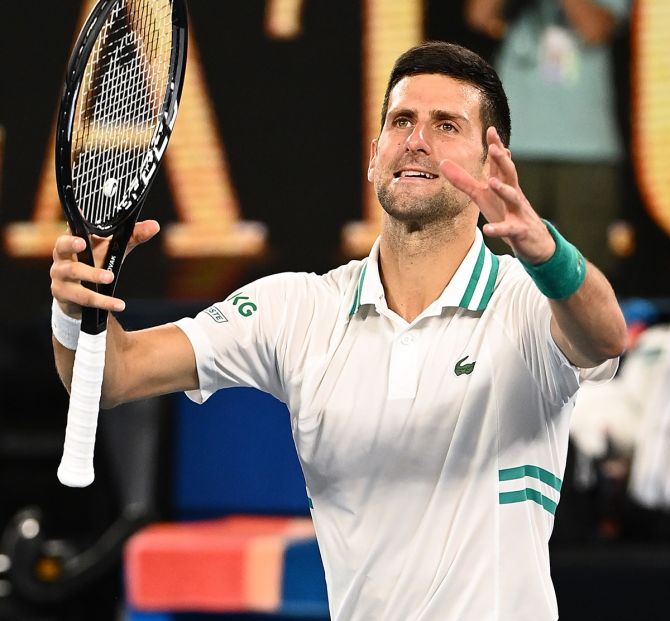 However, it was his opponent, Aslan Karatsev from Russia, who stole the show during the game.

In spite of being ranked 114th in the world, the previously unknown Russian reached the final four of the Aussie Grand Slam, making an impressive showing against the best in the world.

A final score of 6-3 6-4 6-2 only partially reflected the pressure that Djokovic found himself under at several points in the contest.

“Congratulations to him, on his debut to reach the semi-finals. I don’t think it has ever happened in the history of tennis. So, well done to him,” Djokovic said after the match.

The 27-year-old Russian went shot for shot with Djokovic, getting the better of him in several rallies and proving his ability to hit winners as well as defend against the Serbian’s attacks.

“He doesn’t give you free points. I mean, on my serve it’s like every point you have to take, you have to play the rally,” Karatsev said.

In the end Djokovic again showed that he is peerless on Rod Laver Arena, comfortably taking the third set to earn a place in Sunday’s final match.

A recent abdominal injury appeared to be troubling Djokovic far less than during his previous match with Alexander Zverev.

“I felt as best as I felt so far in the tournament tonight. Physically, mentally, as well. I was hitting the ball very well,” Djokovic said.

The Serb will face either Daniil Medvedev or Stefanos Tsitsipas in the final, to be decided after the pair meet on Friday.

“Regardless of who I face on Sunday… I’m ready for the battle for the toughest match of the tournament, without a doubt. Both of these guys are in great form,” Djokovic said.

“Medvedev is playing on extremely high quality. He’s on a winning match streak, over 20 matches won. He’s just the man to beat, you know.

“On the other hand, Tsitsipas produced some phenomenal tennis last night against Rafa. Coming back from two sets down against Rafa on a Grand Slam is a huge effort,” he said.