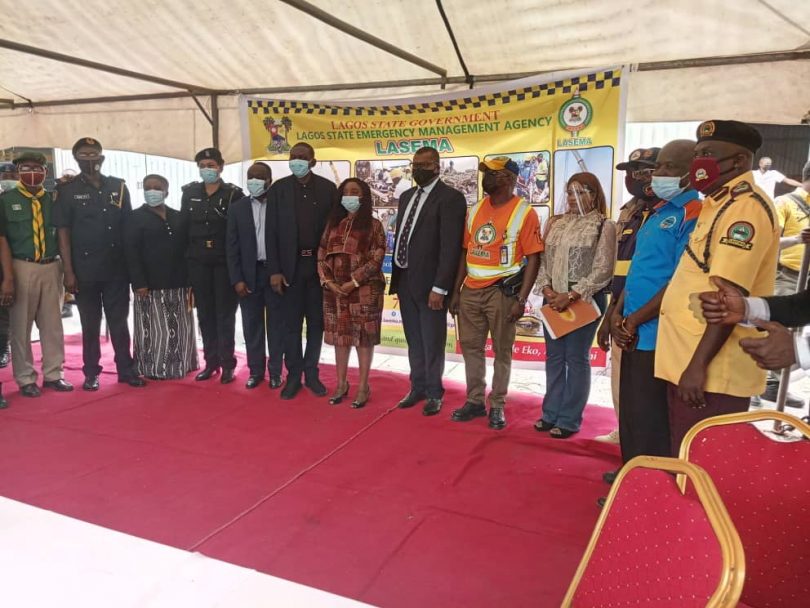 The Commissioner for Special Duties, Tayo Bamgbose-Martins said over 300 tanker accidents were recorded in Lagos in 2021 with 114 being major disasters attended to, between December and Feb. 22, 2021.

According to the Commissioner, the state government is striving to minimise loss of lives and properties during emergencies, adding that the simulation was one of such ways to sharpen the skills of rescuers.

“In 2020 we had over 300 tanker accidents. Between December and now LASEMA has responded to 114 major emergencies saving lives and billions of naira worth of properties. 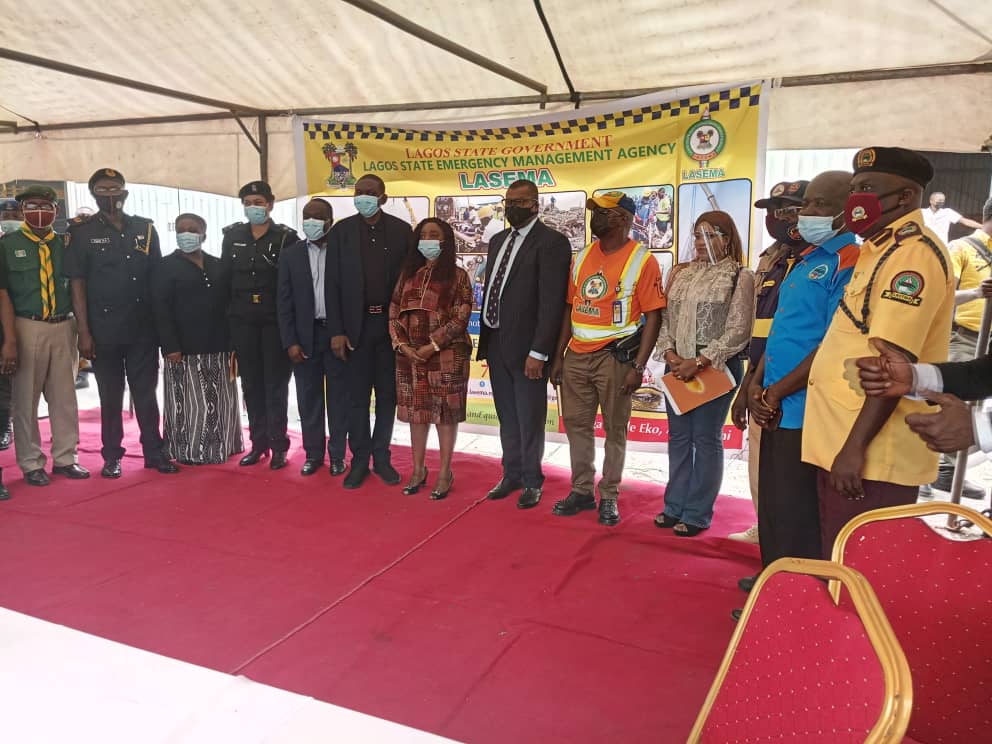 “While some were accidental, others could have been avoided with better awareness. These incidents have not only affected the state as a whole but individual households and businesses experiencing loss of income.

“The actions taken by the government including the purchase of some light-duty equipment for LASEMA are all geared towards ensuring quicker response to all types of emergencies.

“Disaster prevention and management is a top priority of this administration and I can say with confidence and gratitude, that Gov. Babajide Sanwo-Olu has always supported the ministry and all the relevant agencies every time we call on his assistance.

“Lagos is densely populated and being the economic hub of Nigeria has made Lagos prone to disasters of varying causes ranging from global incidences to local industrial activities.

“The state has witnessed a series of accidents, flooding, gas explosions, fire outbreaks, pipeline vandalism and other mishaps. 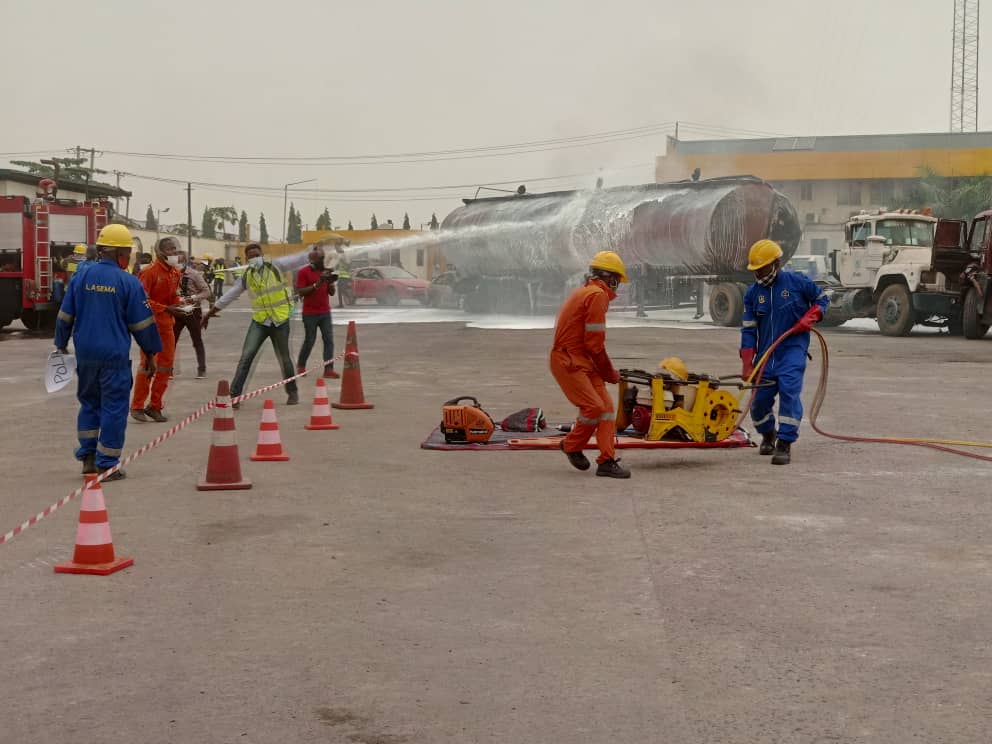 A picture of the simulation exercises held at the Cappa Response Unit, Oshodi in Lagos on Monday.

“However, I am glad to say, that LASEMA and our sister agencies have lived up to the expectation that borne their existence. Loss of lives have been prevented, and the effect of many disasters mitigated with their professional handling of such unfortunate events.

“This simulation exercise, the first this year, is to further prepare our agencies for better disaster

management and also show the level of preparedness of our agencies, stimulating our responders for any event that will need their expertise,” Bamgbose-Martins said.

Commissioner made the disclosure during the First Road Traffic Accident Simulation Exercise held at the Cappa Response Unit, Oshodi in  Lagos on Monday.

The Wife of the Lagos State Governor, Dr Ibijoke Sanwo-Olu has urged the Lagos State Emergency Management Agency (LASEMA) team to use the stimulators equipment to reduce disaster risk to barest minimum.

According to her, Every Government is duty-bound to protect the lives of its people and their properties from disasters, LASEMA’s Simulation Exercise is an important aspect of the Agency’s increased state of Preparedness to ensure proper readiness in order to help fulfill its mission and mandate.

“Lagos State is extremely vulnerable to a high incidence of disasters and emergencies. To mention a few, Lagos is particularly susceptible to Flooding, Fire, Road Traffic Accident, Pipeline Vandalism and Explosions, among others, due to the peculiarity of its topography, climate condition, vegetation and strategic location.

“This is why the frequent occurrence of some of these incidents in Lagos metropolis is to be entirely expected while the responsible agency must be on its toes!.

“In recent times, residents in Lagos State have been inundated with road traffic accidents, Disaster/Emergency incidents, and  Fire outbreaks, being the most obvious examples.

“These unfortunate occurrences destroy homes and several means of livelihoods but also leave their immediate environment blighted while jeopardising the entire society and economy of the state in the process.

It is, therefore, the responsibility of a caring government to engage in active Disaster Risk Reduction efforts by aligning the skillset and competencies of its staff and stakeholders to build the capacity of Lagosians from the grassroots level up, through the establishment of Local Emergency Management Committees, LEMCs, in the 20 Local Government Areas and 37 Local Council Development Areas, in the state, “Sanwo-Olu said.

She said urged residents and organisations in the state to be safety conscious adding that safety starts with people resolving to take individual responsibility to ward off any potential threat.

Sanwo-Olu, however, said It was our collective responsibility to work with government to protect us and also commended the Management and Staff of LASEMA and all the sister agencies working together to ensure safety of residents.

Speaking earlier, the Director-General (DG) LASEMA, Dr Femi Oke-Osanyintolu said the simulation was a demonstration of the agency’s new responsiveness to emergency situations.

Oke-Osanyintolu said from statistics available to LASEMA, casualties recorded in disasters in 2020 were lower compared to 2019 and 2018, attributing the lower human casualties to the improved rescue time and availability of latest equipment.

“We have been able to manage all forms of disaster under the watch of Governor Sanwo-Olu.

” This is a simulation of an accident involving mass casualties. You can see that all the responders are working together with each focusing on their core areas of competence.

“We have helicopters, bikes, towing vehicles, these are the tools that we use to ensure we manage the golden hour.

“The state keeps on carrying a lot of sensitization and advocacy that is why we are going to put more emphasis on enforcement in 2021,” Oke-Osanyintolu said.

He said the agency would ensure that their enforcement was very efficient and effective.

Oke-Osanyintolu, however, concluded that LASEMA was collaborating with the ministry of justice, it is the orientation of our people that needs to be changed.