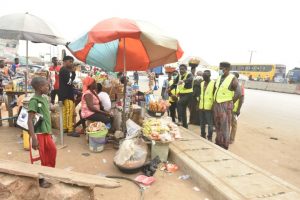 The Federal Government on Wednesday issued a warning to businesses and people encroaching on the Right of Way (RoW) of the Lagos-Ibadan Expressway to vacate before the area before they are forcefully evicted.

The newsmen report that the Federal Controllers of Works in Lagos, Ogun and Oyo States gave the warning during their ongoing two-day mass sensitisation of residents on the RoW and the dangers of road abuse.

It was further reported that Mr Umar Bakare, the Federal Controller of Works in Ogun State led a delegation of senior engineers from both Lagos and Ogun on the inspection which started from Lagos.

Mr Adewale Adebote, the project supervisor of section one of the highway which spans from Ojota in Lagos to Sagamu Interchange represented the Federal Controller of Works in Lagos.

The trip began with a sensitisation of mechanics on the RoW opposite Lagos State Accident and Emergency Centre at the Old Toll Gate in Lagos.

The engineers gave out fliers, placed seal of removal notices on shanties, abandoned vehicles, wares, fences and other facilities encroaching on the RoW.

Its public address system blared out messages in the three major indigenous languages, English and Pidgin on dangers of abuse of the Lagos-Ibadan Expressway undergoing reconstruction and rehabilitation.

The delegation discussed with mechanics, traders, business owners and various artisans involved in block moulding and other activities on road setbacks and under the bridges.

They issued warnings and educated the people on the approved road setback for filling stations, fences and other buildings along the highway.

They explained that after the sensitisation exercise, quit notices were going to be served and a date for demolition communicated should those liable refuse to obey the advice of government.

They also educated block makers and sand dealers under some bridges on the harm they were doing by blocking drains under the bridges to cause flooding leading to damage.

“This place cannot be a mechanic workshop or motor park anymore, there will no longer be buying and selling on the Lagos-Ibadan Expressway, if you are off the Right of Way nobody will disturb you

” After this sensitisation we will come here and mark, then we will come with quit notice then the forceful demolition,” Bakare told encroachers along Berger axis.

Also, filling stations on the RoW were served notices and Bakare educated them on the approved road set back which is 150ft or 45.72 metres from the road median.

He advised those who alleged to have requisite state or federal government approvals to tender such documents to the office of either the Federal Controllers of Lagos or Ogun States depending on their jurisdiction.

The controller also warned those living under the bridges to vacate saying that their bathing and cooking activities could cause fire to the bridges which had suffered previous disasters.

Bakare told journalists that the Minister for Works and Housing, Mr Babatunde Fashola had given a directive for all Federal controllers to carry out an intensive awareness campaign on the dangers of roads abuses.

He said that the federal controllers had a mandate “to take full control of Right of Way of all federal highways”.

He said that there were several illegal activities ongoing under the bridges and RoW of the highway between Ojota in Lagos where the project begins to Ojoo in Ibadan constituting danger to the highway.

” This is calling us to effect and enforce a subsisting highway law, to this effect, the controllers of Lagos, Ogun myself and the controller of Oyo, we have come together to carry out enforcement on Lagos-Ibadan for the following reasons.

“Lagos-Ibadan Expressway is one of the most important federal highways in the whole of the country. It’s an expressway incorrect engineering definition of it when it was first constructed and opened to traffic in 1978.

“And it served as so for several years after, along the line a lot of development came from the abutting communities, encroaching and infringing on the expressway status of the bridge.

” Overtime the road has suffered a lot of failures due to age, due to abuse, the federal government has decided to reconstruct the road, not only that, to expand and upgrade the road to be able to carry the challenges of even excessive axle load that we are experiencing.

“Now, it is the duty of Federal Ministry of Works to protect the investment of the federal government of Nigeria. This we can do by protecting the RoW as charged by the honorable minister, ” he said.

It was reported that while various market associations trading under the popular Kara Cattle Market promised to sensitive their members and evacuate before government forceful eviction some trespassers begged for mercy.

Block jackets, granite dealers and food vendors under the bridge around Mowe and Ibafor narrated their ordeal on how their businesses tamed criminality in the area.

Some traders and artisans on the road setbacks between Kara and Ibafor also begged for the government’s support in providing alternatives through job creation and empowerment opportunities to take them off-road setbacks.