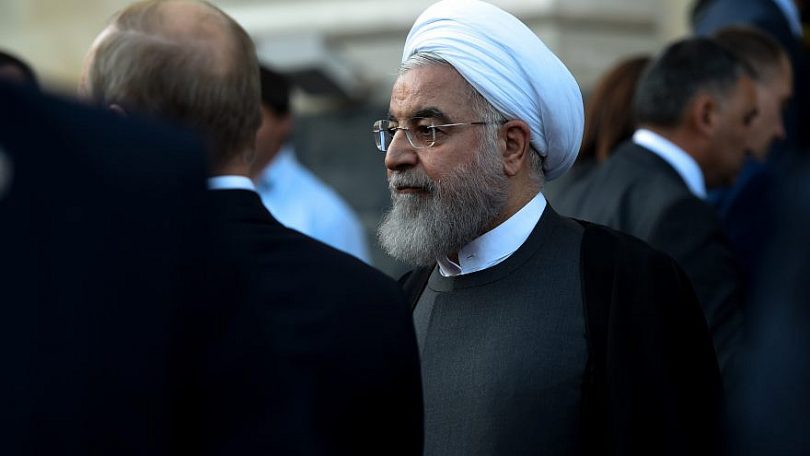 Purim celebrates the deliverance of the Jews of ancient Persia by Mordechai and Esther—two Jews who thwarted the genocidal intentions of the Persian prime minister Haman through their courage, daring and strategic genius.

Netanyahu warned this week that, just as “another Persian villain” tried and failed to destroy the Jewish people, so too would Iran’s “delusional regime” be prevented from attaining nuclear weapons.

But there’s another unsettling analogy to be made here. For the story of Purim tells us about the extreme perilousness of the Jews of the Diaspora who are inescapably vulnerable to never-ending attack.

Currently, the Western world is convulsing in a pandemic of brazen anti-Semitism, which draws upon imagery and tropes from early Christian theology, Nazi and Communist ideology and the modern variant of Jew-hatred, liberal universalist dogma that portrays Israel as a devil state.

In America, comedian Michael Che promoted the Israel vaccine libel by quipping on the NBC show “Saturday Night Live”: “Israel is reporting that they vaccinated half of their population. I’m going to guess it’s the Jewish half.”

In Britain, a Bristol university lecturer and pro-Palestinian Jewish-conspiracy theorist, David Miller, issued a diatribe last weekend in which he called for the “end” of Zionism as a “functioning ideology of the world.”

He launched a direct attack on Jewish students, claiming that they were “being used as political pawns by a violent, racist foreign regime engaged in ethnic cleansing,” and that Arab students on campus were unsafe as a result.

Outraged calls to sack both Miller and Che have predictably prompted their supporters to criticize as hypocrites those who condemn “cancel culture” while calling for these individuals to be canceled.

Anti-Semitism, though, is unique. It doesn’t just provoke contempt, fear or hatred. It presents Jews as uniquely evil and powerful, a global conspiracy to promote their own interests at the expense of everyone else. And the correct response to evil is to eradicate it.

Anti-Semitism is therefore innately deranged, dangerous and even murderous, unlike prejudice against any other group, people or cause.

After the Holocaust, it went underground in horror and shame, but in recent decades that social control has disappeared. This is largely because of the Marxist takeover of the left and its agenda of cultural revolution.

Anti-Semitism has thus been seeded throughout the West by Palestinianism, Islamism, black power and the left-wing “intersectionality” agenda, all making common cause with far-right anti-Semites who in numeric terms have been overwhelmingly eclipsed.

Moreover, it infuses Western culture itself. Among countless numbers of people, their only knowledge of Jews is drawn from such hateful and stereotypical figures as Fagin or Shylock. Many of the West’s greatest literary, philosophical and artistic figures were profound anti-Semites.

Clearly, though, these cannot and should not be banned. A difficult and careful line must be drawn.

In America, there’s an assumption that free speech is absolute and is guaranteed by the U.S. Constitution. Given the hold that “cancel culture” now exercises on American life, one might conclude that this hardly delivers the protection it’s held to provide.

In Britain, whose common law tradition means that broadly everything is allowed unless it is expressly prohibited, free speech is a treasured principle but is not absolute. It is legally restricted in certain very limited circumstances, such as inciting violence or racial hatred.

This goes back to the 19th-century liberal thinker John Stuart Mill, who basically said that people should be free to do what they like as long as it didn’t hurt anyone else.

That’s the reason why David Miller should be fired by Bristol University—not because of the views he promulgates, but because of the direct threat he poses to Jewish students.

It’s important to distinguish such direct harmfulness from the freedom to disseminate views that others find noxious. For the attempt to suppress such views has led to the situation on campus where conservative scholars are banned or violently hustled off platforms, on the grounds that their opinions breach any of the orthodoxies with which cultural conformism is currently being coerced.

To attempt to cancel anti-Semitism would not only be impossible; it’s also fundamentally wrong to airbrush anything out of history. The idea that such cultural erasure acts as a kind of reset to year zero, providing a blank slate on which can be imprinted only virtuous principles, is a terrible fallacy.

Apart from the obvious point that any new principles may themselves be merely exercises in cultural bullying, erasing the past means we couldn’t then learn from it the lessons we all need to learn.

Moreover, pushing anti-Semitism underground makes Jews less safe than having it out in the open where we can all see it for what it is. Britain’s former Labour Party leader Jeremy Corbyn or America’s “Squad” of anti-Jewish, anti-Israel congresswomen alert us to the animus against Jews that otherwise would influence public policy under the radar, making it less possible to be countered.

But we can never eradicate it. The West is in very serious trouble, as we can all see from the madness over “cancel” culture, identity politics and the steady eclipse of tolerance and reason. When a culture is going down like this, it always turns on the Jews. We can no more stop this than roll back the tides.

What we can do is what the Jewish people have always done: bear witness to what’s happening, record it and hold its perpetrators to account.

We should target their weak spots: their vanity and narcissism, their inflated claim to intelligence and moral virtue. We should pillory them publicly as too sloppy, stupid and credulous to be worthy of any academic post.

We should call out the anti-Israel churches and “human rights” NGOs as supporters of racism, colonialism and ethnic cleansing, which we can prove by publicizing the Palestinians’ Nazi-style tropes and regular exhortations to murder Jews and steal Israeli cities such as Haifa and Jaffa.

Rather than drive Western anti-Semites out of the public square, we should use it ourselves to expose them to what they most fear: public exposure and ridicule as bad, stupid and ludicrous people.

What Jewish people can and must do is protect themselves as best they can. That’s why Israel is the safest place for a Jew to be: because “never again” is in its DNA.

The inescapable vulnerability of Diaspora Jews saps their capacity to stand up against their tormentors. At best, it makes them timid, striving only to be left alone by keeping their heads down. At worst, they actively side with the foes of the Jewish people. As in America, where some 70 percent of the Jewish community vote Democrat, these sign up to the liberal universalist ideology that has the Jews in its cross-hairs and, in their keenness to be an indistinguishable part of the herd, forget that the Jews must always be outside it.

Mordechai and Esther did not forget who they were. They refused to be intimidated, drew upon their reserves of courage and turned the tables on their would-be destroyer.

Israel will defend itself against the present-day Haman in Tehran. The Jews of the Diaspora remain rather more cruelly exposed