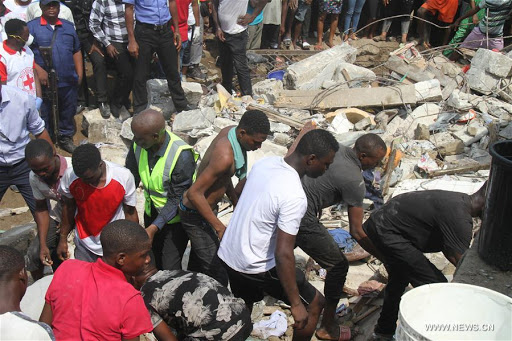 …As a minor fire incident was reported at Army Headquarters***

A carpenter was killed while a bricklayer was injured when a security post under construction suddenly collapsed on Monday at Badagry Grammar School in Lagos State.

A witness, Mrs Ruth Whenu, told newsmen that the incident occurred around 3:40 p.m. while the workers were busy with the construction.

“The incident involved two victims, a carpenter and bricklayer, working at the site.

“In the process, one Odunayo Okunola, a carpenter, lost his life due to the weight of the concrete that fell on him.

A relation of the deceased carpenter, Ajide James, said that his corpse would be taken for burial in their village in Ogun.

He said that the injured bricklayer was gradually responding to treatment but sustained high degree of injury.

“Before they got to the hospital, the carpenter had given up the ghost while the bricklayer sustained serious injury.

“The corpse of the carpenter was deposited at our mortuary, while our doctors and nurses are taking care of the injured bricklayer.

“Unfortunately, against medical advice, the family of the bricklayer have requested from the management of the hospital that they want to carry the bricklayer to Ajase in Republic of Benin for more attention.

“Since they requested against our advice, we have released the injured bricklayer but the corpse of the carpenter is still with us,” he said.

In the meantime, the Nigerian army has reported a minor fire incident resulting from electric spark on Tuesday morning at the headquarters complex in Abuja.

The Director, Army Public Relations, Brig.-Gen. Mohammed Yerima, in a statement, said the incident which happened at about 10.15 a.m. was as a result of minor electrical fault in one of the offices.

According to him, the Nigerian Army Fire Service Department has since put out the fire.

“No casualty was recorded during the incident and normalcy has since returned to the complex,” he said.