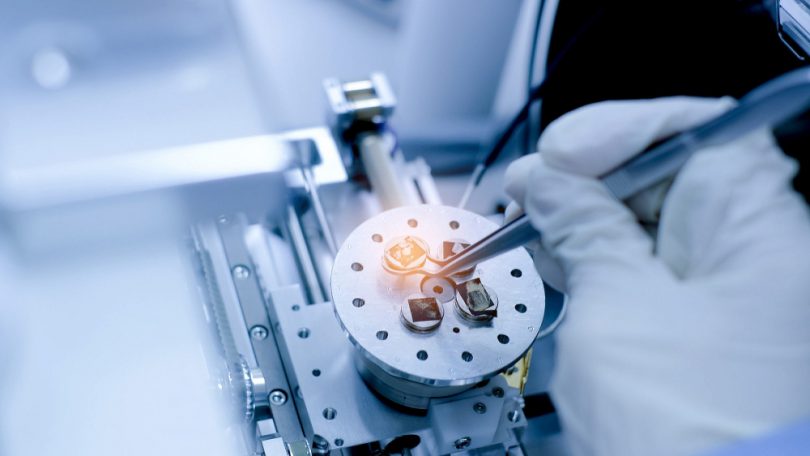 Nanotechnology, the study and application of extremely small matter, is set to transform both the civilian and military worlds in many ways, a senior Israeli defense company has told JNS.

Elta, a subsidiary of Israel Aerospace Industries that specializes in radar, communications, autonomous ground systems and cyber products, is currently taking part in a nanotechnology accelerator track to develop startups developing nanotechnology, together with MassChallenge Israel, which is part of a global network of zero-equity startup accelerators.The joint track will support early-stage startups as they seek the use of very small matter on the molecular scale for industrial needs or the use of materials with structure at the nanoscale.

“The startups we have met through MassChallenge have technologies that can be applied to our core business,” said Israel Lupa, executive vice president and chief technological officer of Elta. “We are looking forward to meeting additional innovative startups in the 2021 MassChallenge Israel cohort.”

This is the third year that Elta is working with MassChallenge Israel, which focuses on a new challenge every year. The 2020 track focused on future sensing.

“The world today is able to develop technology that can control material at the level of molecules and engineer molecular structures artificially,” he explained. “Once you get down to the level of nanometrics, the qualities of the material change drastically. They can resist radiation or water, for example. It is possible to plan such material and control these qualities.”

While work has been underway in this field for more than 20 years, nanotechnology has only reached maturity at the industrial level recently, noted Lupa, and has left the world of laboratories. Today, the material can be produced in large quantities, leading Elta to take up the issue.

In the word of defense, nanotechnology can significantly improve the ratio between the strength of the material and its weight, which is critical to designing anything from ships to radars to spaceships. The ratio has meant that compromises needed to be made between the weight that platforms could manage and the strength of the material. Improving the ratio gives planners and engineers new options.

An additional use is energy transfer and batteries, which are vital components in autonomous vehicles, charging stations and solar-powered systems. “Nanomaterials enable the building of new types of batteries. This is relevant to both the civilian and military worlds, and could affect every system that we build,” said Lupa.

The material can be manipulated to make it resistant to water or dust and to determine whether or not it will reflect light. Antennas can be made water-resistant, and systems placed on-board aircraft can be made immune to the effects of high speed or extreme temperatures.

Lupa said the technology can also enable the creation of new types of sensors that monitor environments, which could be highly useful for a military unit that wants to know, for example, the quality of water in the area it is operating in.

“There are special textiles that can defend soldiers from heat, radiation or bullets,” explained Lupa. “Nanotechnology can absorb energies. The technology allows for the development of such products.”

Similarly, it can be used to produce clothes that conduct electricity, enabling soldiers to charge equipment on their bodies without the use of wires. “There is almost no area that this does not touch on,” said Lupa.

Elta usually receives between 50 and 100 responses from startups looking to take part in accelerator programs. Out of those, a small group is chosen. At least 80 percent of the companies are Israeli on average, but international startups have taken part as well, including from countries such as India and Poland.

During non-pandemic times, the companies arrive at a MassChallenge building in Jerusalem, where they receive assistance and guidance from both it and Elta on raising capital, accessing investors, drawing up a business approach and creating market focuses. They also receive technological and technical assistance when needed. The entire service is cost-free for startups.

Now, the process is being done almost entirely virtually, said Lupa. “If a company matches our needs, we advance to more intensive cooperation, which could take the form of investment in the startup. Most of the time, we get one to two companies that match up with us. The remainder gets free assistance.”

Headquartered in the United States with locations in Boston, Israel, Mexico, Rhode Island, Switzerland and Texas, MassChallenge is committed to strengthening the global innovation ecosystem by supporting high-potential startups across all industries from anywhere in the world. To date, more than 2,400 alumni have raised more than $6 billion in funding, generated more than $3.2 billion in revenue and created more than 157,000 total jobs

Yonit Serkin, managing director of MassChallenge Israel, added: “Through this partnership, we have seen that startups and ELTA can work together to create cutting-edge technology solutions. This track will further connect startups to relevant experts, industry leaders and academic researchers looking to develop meaningful relationships with entrepreneurs.”