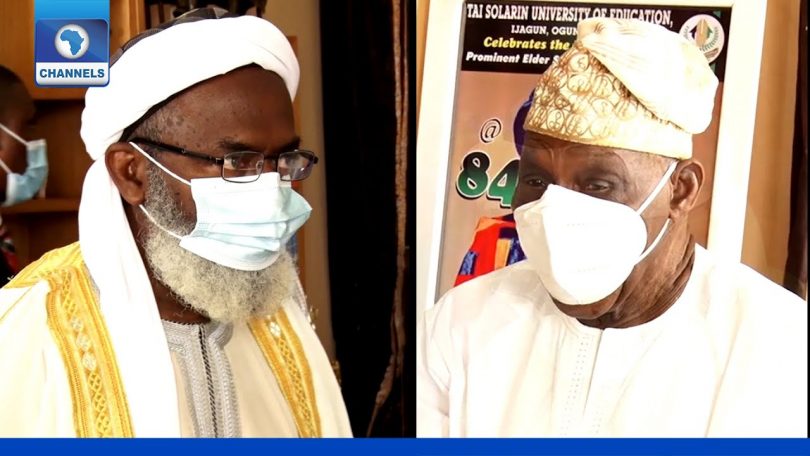 …As FG promises justice for victims of Ebonyi massacre***

They made the call in a communique issued after a closed-door meeting in Abeokuta on Sunday.

They also called on the Local Government Councils, States and Federal Government to work together to return out-of-schools children to classes, adding that education remains key to tackling insecurity.

They said that the special courts would cut the long bureaucracy in dealing promptly with cases of banditry, kidnapping, ransom demanding and unlawful carrying of weapons.

Obasanjo and Gumi added that security remained the responsibility of all Nigerians, saying “we must not advertently or inadvertently, in words, action or inaction encourage or support criminality”.

The duo added that the hardened criminals must be hard hit with stick, saying unlawful carrying of arms should be seriously punished.

They appealed to the Federal government to take up the issue of security within the Economic Community of West African States towards a regional solution.

“Every community must be encouraged and empowered to stand firm and strong against criminals.

“There should be protection and reward covertly for whistle blowers against criminals living in the community.”

They urged all well-meaning Nigerians to support government in finding solutions to insecurity by desisting from blame game, ethnicising as well as regionalising these crimes.

They advised the Federal government to be proactive, secure necessary and updated intelligence to deal with organised crimes as well as have common policy for the Nation.

”We concluded that to keep Nigeria safe and secure for all Nigerians and others living in Nigeria is a task that all well-meaning Nigerians must engage in separately and collectively.”

Those present on the side of Obasanjo were Agura of Gbagura, Abeokuta, Oba Babajide Bakre and Chairman, Christian Association of Nigeria in Ogun , Tunde Akin-Akinsanya.

Other were Chief Imam of Egbaland, Sa’addallah Bamigbola and Former Chairman of the Police Equipment Fund, Kenny Martins.

In another development, the Federal Government has pledged to ensure justice for victims of the recent attacks on three communities of Ishielu Local Government Area of Ebonyi, by unknown gunmen.

Vice President Yemi Osibanjo made the pledge on Sunday in Abakaliki while addressing stakeholders of the state after inspecting the affected communities and the Effium/Ezza-Effium intra-communal crisis.

Osibanjo, who commiserated with the government and people of the state over the unfortunate incident, promised that the assailants would be arrested and duly prosecuted.

“I convey the condolences from President Muhammadu Buhari as there is no justification whatsoever for the killings and destruction of property.

“The killings must be condemned in its strongest terms as the victims must have lived together for long with those who may have killed them,” he said.

The Vice President said that it was the responsibility of federal, state and local governments to ensure that such killings did not occur.

“I am, however, pleased that at the Egedegede Community, the political leaders found some facts and evidence which would help security agencies in their investigations.

“This would help trace the perpetrators of this terrible act but our duty as political leaders is to maintain absolute peace in areas where we serve as leaders,’’ he said.

Gov. David Umahi thanked the Vice President for accepting to be sent by Buhari to visit the state in its mournful situation.

“You must have been reading in newspapers and the social media the amount of insults which South East governors receive for their efforts to ensure the unity of Nigeria.

“I thank God that we prevented a serious retaliation when the incident occurred but as the chief security officer of the state, I cannot control the situation if such attack re-occurs,” he said.

Chief Martin Elechi, the immediate predecessor of the current governor, urged the Federal Government to immediately stem the spate of killings and destruction across the country as it was becoming embarrassing.

Chief Eni Uduma, Representative of the Association of Local Governments of Nigeria (ALGON) Ebonyi Chapter, said that the people could no longer tolerate the incessant killings and destructions of their property by those suspected to be herders.