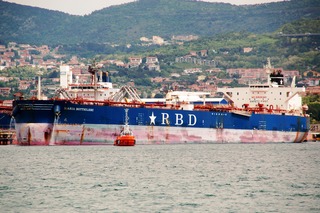 According to track, as of 1130 UTC MINERVA NIKE was also refloated and already under way in Great Bitter Lake. Understood both tankers didn’t sustain damages, though it may not be the case with RUMFORD, she’s moving in Great Bitter Lake at some 6.6 knots surrounded by 3 tugs, probably under tow.

In the meantime, Offshore support ship MPV EVEREST suffered fire in engine room on Apr 5, deep south in Indian ocean, while en route from Davis and Mawson research stations in east Antarctica to Fremantle Australia, with 109 expeditions and crew on board.

General Manager of Operations and Safety at the Australian Antarctic Division, Charlton Clark, said the fire started just after 2pm.

“The fire was detected in the vessel’s port-side engine room. The room was quickly isolated to contain the fire, before it was extinguished by the fire suppression systems,” Mr Clark said.
There’s 72 Antarctic expeditioners on board, some of whom have been in Antarctica for a year and half.
The ship drifted for some time, is under way again since around 1400-1500 UTC Apr 5, at 7-8 knots speed.