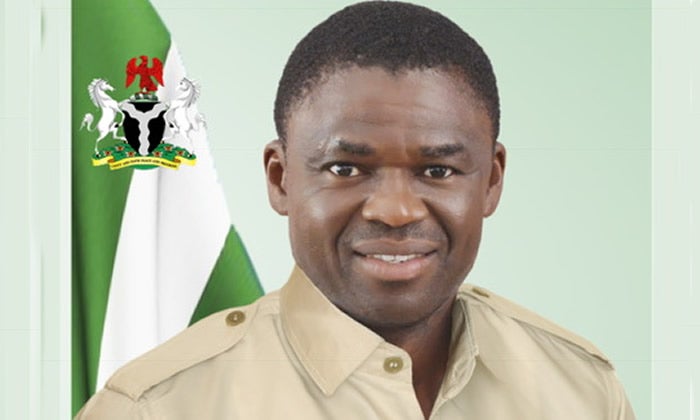 The Deputy Governor of Edo, Philip Shaibu, on Monday led the state male football team to win the gold medal at the ongoing 20th National Sports Festival (NSF) in Benin.

In the match, Edo bounced back from a two-goal deficit to defeat the Lagos team 3-2 in the final at the main bowl of the University of Benin Stadium Complex.

Hassan Akinkunmi put the Lagos team ahead in the 10th minute of play while Chisio Orji extended the lead in the 19th minute to silence the hosts’ cheering fans.

Solomon Usia, however, reduced the tally for Edo in the 20th minute before first-half substitute Godwin Chukwu leveled up for the hosts before the break.

Meyiwa Samuel scored from the penalty kick spot in the second half to give Team Edo the winning goal.

The newsmen report that the stadium was filled to brim for the match graced by Amos Adamu, erstwhile director of the now-dissolved National Sports Commission (NSC).

Shaibu, who was a registered player for the football event, came in three minutes into the end of the match when the captain’s band was handed over to him.

The win secured the second gold medal for Edo from the football event as their female team had earlier beaten Lagos by a lone goal in the women’s category.

Reacting to the victory, the deputy governor who is also the Chairman of the festival’s Local Organising Committee (LOC) said the team’s commitment and doggedness led them to the victory.

He said he was delighted to have led the team to victory just as he commended Gov. Godwin Obaseki for his support for sports development in the state.

In another development,  Team Ondo Male Table Tennis on Monday at the ongoing National Sports Festival, Benin, defeated their Rivers counterpart 3-2 in the finals of the event to pick a gold medal.

The trio of Akinwale Fagbamila, Mati Taiwo and Umeh Amadi performed brilliantly against a well-experienced Rivers team who made frantic efforts to stop them.

However, their efforts could not stop the more determined Ondo State table tennis players from picking the win.

Captain of the team, Fagbamila in an interview with the newsmen in Benin attributed the team’s achievement to luck and hard work

Fagbamila said he was happy that their preparations were rewarded with gold medal.

“We are all happy as a team, gold medal is not easy, especially in a team’s event, Ondo State will be proud of us with this medal,” he said.

He said the people of the state should expect more medals from remaining table tennis events at the ongoing festival.