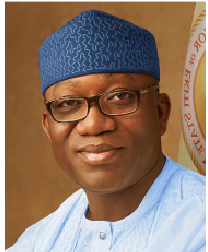 …As Magashi says Buhari saddened, over killing of soldiers in Benue***

The Nigeria Governors’ Forum (NGF) express worry over recent attacks on security formations in Imo, Benue and other parts of the country.

Gov. Kayode Fayemi of Ekiti and NGF Chairman made these known briefing newsmen at the end of the forum’s meeting on Wednesday night in Abuja.

“NGF members are particularly worried following what happened in Imo state, the attacks on the correctional facility and the police command headquarters.

“The release of prisoners, and successive acts of violence and insecurity across the country, and the killings of soldiers at Benue.

“The forum has expressed its worry that it is time for us to revisit comprehensively, the nature and depth of this security crisis.

“The crisis would have gotten worse if states had not been taking the actions they have been taking individually and collectively.

“It is the steps taken at the state level that have managed to reduce the depths and the enormity of the security challenges. Nonetheless, it’s still a worrisome development for us

“We feel we will need a special review of the entire gamut of the security issues that we are dealing with.

Fayemi said that the governors also reviewed the economy as well as Executive Order No 10 of 2020 and related matters.

He said that the forum took its positions on issues regarding Order 10 and financial autonomy for the judiciary and legislature.

Fayemi, who did not disclose the resolutions, said that the NGF committees would meet with representatives of the judiciary and legislature on Thursday to present those resolutions directly to them.

The Judicial Staff Union of Nigeria (JUSUN) are currently on strike protesting the non-implementation of financial autonomy for the nation’s judiciary.

This action followed Jan. 14, 2014, judgment of Adeniyi Ademola, then a judge of the Federal High Court, which abolished the piece-meal funding of the state and federal courts by the executive.

The court held that funds meant for the judiciary should instead be disbursed directly to the heads of court and not to the executive arm of government.

The federal legislature and judiciary, have to a large extent, been enjoying financial autonomy status as they receive their appropriated funds in bulk unlike their counterparts at the state levels who always get what the governors feels like releasing to them.

In May 2020, President Muhammadu Buhari, signed the Executive Order 10 to give force to the provision of section 121(3) of the Constitution which guarantees the financial autonomy of the state legislature and state judiciary.

The Executive Order authorises the Accountant-General of the Federation to make deduction from the Federation Account the money allocated to any state of the federation “that fails to release allocation meant for the state legislature and state judiciary in line with the financial autonomy guaranteed by Section 121(3) of the Constitution of the Federal Republic of Nigeria 1999 (as Amended)”.

In another development, President Muhammadu Buhari is displeased and saddened over the killings of 11 soldiers in Bonta Village, Konshisha Local Government Area Benue.

The Minister of Defence, rtd Gen. Bashir Magashi, made this known on Thursday when he led Service Chiefs and other top military officers on a visit to Gov. Samuel Ortom at the Benue Peoples House, in Makurdi.

”The Nigerian Armed Forces is deeply saddened following the killing of 11 soldiers and a Captain in Konshisha LGA of Benue.

”This will not discourage the Army from carrying out its duties of protecting lives and property in the country.

”To boost the morale of the soldiers, perpetrators of the dastardly act must be apprehended and made to face the wrath of the law,” he said.

In his remarks, Gov Samuel Ortom, expressed deep sympathies to the President and the armed forces over the barbaric act.

”I have not slept since the killing of the soldiers,” he said.

Ortom acknowledged the enormous support and contributions of security agencies, especially the military in ensuring peace in the state.

The governor said he had directed stakeholders in Konshisha Local Government Area to fish out the perpetrators.

He pledged his administration’s support and cooperation with security agencies to ensure those responsible for the dastardly act were apprehended and brought to justice.

Ortom, therefore, prayed for the restoration of peace and security in all parts of the country.