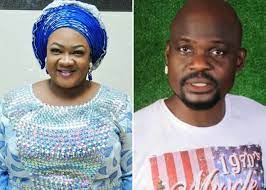 In a viral video, the comedienne revealed how some parents had allowed their kids to stay with her after the crash of her marriage so she wouldn’t be lonely.

She said that the incidence happened while she was rendering help to Baba Ijesha, adding that it was during one of his visits that he molested one of the three girls living with her.

Princess said the defilement harmed the child as she began to sink academically and otherwise.

After seven years, the little girl opened up to Princess and someone else what Baba Ijesha did to her.

She said she wanted to catch him red-handed and had to call him for a meeting in her house where she set up a CCTV camera, and he was captured trying to molest the girl again.

She berated people who are accusing her of trying to set up the actor and tarnish his image.

Shortly after Ijesha’s arrest, his colleagues began to have different opinions about the issue, some of them claimed that he is innocent and can only be found guilty once the footage is released.

Others said that it is inhumane to ask for a video of a child being molested to be put on social media.

This has since caused a run-in between some of the actors.

One of such persons is Actress Iyabo Ojo who took to her social platform to call out her colleague Yomi Fabiyi for his recent comments over the rape allegations against Baba Ijesha.

Fabiyi while sympathising with Baba Ijesha had released a post asking his colleagues not to jump to conclusions.

He went on to demand evidence first before taking sides.

In the Instagram post, he wrote: “Sometimes COMMON SENSE and CAUTION are needed more irrespective of one’s personality and principle to serious issues or whatever you know.

“I am not going to be part of a bad antecedent. If my words come ambiguous, seek understanding before rushing to hurt your colleague online, too low and dirty.”

Also, actress, Foluke Daramola has come out to apologise to Princess for asking for the footage of her foster child being molested by Baba Ijesha.

Meanwhile, the Theatre Arts and Motion Pictures Practitioners Association of Nigeria (TAMPAN), says it would ensure justice is served in the case involving Baba Ijesha.

In a statement by Yemi Amodu, its director of research and documentation, TAMPAN condemned the development, noting that the association would never support such “ignoble acts.”

“We find it obligatory to condemn in totality the odious occurrence of paedophilia confessed to by Mr Olanrewaju James aka Baba Ijesha as confirmed by the police,’’ the statement said.