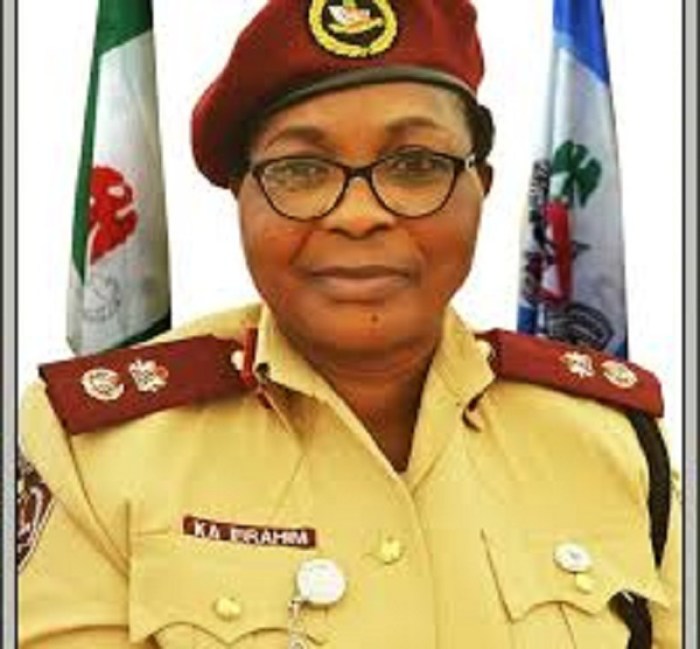 … As Truck crushes 2 motorcycle riders to death in Ogun***

… While Mobile court convicts 30 drivers for traffic offences in Edo***

The Federal Road Safety Corps (FRSC), in Osun, says eight persons have lost their lives following an accident that occurred on Gbongan-Osogbo expressway.

The Sector Commander, Mrs Kudirat Ibrahim, made this known in a statement issued by Mrs Agnes Ogungbemi, the command’s spokesperson, in Osogbo.

The newsmen report the accident occurred at 1:20 a.m., on Saturday, opposite Ataoja Overhead bridge, along Abere, Osogbo-Gbongan expressway.

Ibrahim said 36 0thers had sustained various degrees of injuries in the lone accident, in which 61 persons were involved.

“The vehicle, which was heavily loaded with Jerry cans of palm oil and over 60 passengers, was trying to ascend the ramp.

“The vehicle lost control, rolled backward and fell by the side into the drainage, throwing off the jerry cans on passengers and killing some in the process,” she said.

She said the injured had been taken to Ladoke Akintola University Teaching (LAUTECH), and Asubiaro Hospitals, both in Osun.

Ibrahim urged road users to avoid flouting safety rules that often endangered their lives and those of other innocent citizens.

She, however, said the command had in a swift response, also deposited the corpses in a morgue and cleared the highway to avoid gridlock.

In a related development,  two motorcyclists were on Friday night crushed to death in an accident involving two motorcycles and a Leyland truck opposite Forte Oil filling station around Kotopo on the Abeokuta-lbadan road.

Mr Babatunde Akinbiyi, the Spokesperson, Traffic Compliance and Enforcement Corps (TRACE), confirmed the incident to the newsmen on Saturday in Abeokuta.

Akinbiyi explained that the accident occurred at 8.25 pm Friday, alleging that it was caused by reckless driving and impatience on the part of the motorcycle riders.

He said that the motorcyclists rammed into the truck coming from the opposite direction.

“The two motorcycles and the truck have been taken to Aregbe police station in Abeokuta,” he said.

He added that one of the deceased was taken away by his relatives while the body of the second person was deposited at the morgue of the Federal Medical Centre, Idi Aba, in Abeokuta after being confirmed dead by a medical doctor at the hospital.

In the meantime, a Mobile Magistrates’ Court on Ahor/Uteh/Lagos Bypass in Ovia North-East of Edo, on Friday, convicted 30 drivers for violation of traffic rules.

The Chief Magistrate, Mutairu Oare, who handed down the sentence after taking their pleas, however, provided the convicts with an option of fine ranging from N2,000 to N20,000.

Oare, however, discharged three other drivers.

The prosecutor, Mr Bala  Sariki, had told the court that the 33 drivers were apprehended at Ahor/Uteh/Lagos Bypass.

Sariki said they were charged with offences ranging from violation of traffic signs, lack of drivers’ licence, violation of COVID-19 protocols, speeding, among others.