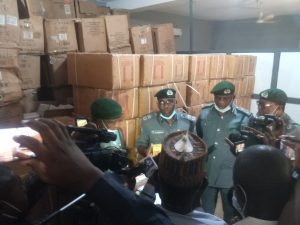 The Nigeria Customs Service (NCS) Federal Operations Unit Zone ‘B’, has decried lack of cooperation of some Nigerians in border communities to efforts of the service to check smuggling.

Mr. Al-Bashir Hamisu, the Comptroller of the Unit, made the remark while briefing newsmen on the activities of the unit on Friday in Kaduna.

Hamisu attributed the successes recorded by the command to the improved capacity of the unit’s officers.

He kicked against the attitude of some unpatriotic citizens who were aiding and abetting smuggling in the zone.

According to him, the cooperation being accorded the agency and its officials from the border communities has reduced drastically.

“The general public is not with us, especially those at the border community; they are now on the side of the smugglers.”

Comptroller Hamisu noted that the cooperation from the general public at the moment was not encouraging.

While calling for more collaboration with the general public and other sister agencies, the Comptroller called on the media to enlighten the people on the dangers of smuggling.

He said tackling smuggling will help to safeguard the country’s economy and ensure the success of the government’s economic policies.

He noted that smuggling posed a lot of danger to the corporate existence of the country and complicates the security situation.

Hamisu explained that smuggling destroys the economy and affects revenue generation,  thereby,  affecting the provision of social services to the people.

He added that smugglers bring in fake, substandard and expired drugs into the country.

“All these would be injurious to our collective wellbeing, as a nation,” he said

Hamisu also called on vehicle owners to caution their drivers to desist from carrying smuggled goods, adding that “ignorance of the law should not be an excuse”.

The comptroller said the unit had seized items with duty paid value of N165.198 million within three weeks.

The newsmen report that figure represented the activities of the command from April 9 to 29.

Hamisu said the command made 122 seizures within the period, including 360 cartons of pharmaceutical products, without NAFDAC Registration number, around Jos.

Also seized were 20 (25 litres) kegs of premium motor spirit, which was auctioned out immediately; 76 bales of second-hand clothes; 1,711 bags of foreign rice in 50kg; and 6 packs of foreign milk, among others.

The comptroller said that 27 vehicles used for smuggling activities were impounded within the period under review.

He explained that some of the items were confiscated around Sokoto, Zamfara and other areas within its operations.

Other items seized included two units of used vehicles, 19 carton of couscous, 70 bags of foreign fertilizer in 50kg and 191 kegs of foreign vegetable oil in 25 litres, 591 foreign spaghetti and macaroni.