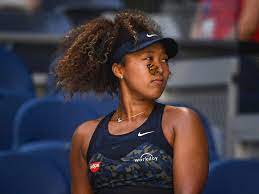 …. As Manchester United vs Liverpool fixture postponed over safety concerns***

Naomi Osaka suffered a shock second-round exit to Carolina Muchova at the Madrid Open, but there was no such trouble for Simona Halep as she held off Zheng Saisai.

Second seed Osaka was playing just her second match on clay since the 2019 French Open due to injury issues.

The world number 20, who had already defeated two top-five players this season, prevailed 6-4 3-6 6-1 in a time of one hour and 49 minutes in the Spanish capital.

Osaka has now lost two of her last three matches, having been eliminated from the Miami Open quarter-finals by Maria Sakkari at the end of March.

“I think today for me it was quite different from the last time I lost in Miami, and I actually think I played much better here. So, I’m very happy about that,” Osaka said.

“I think what I can take away from this is that I tried my best throughout the entire match. I think, tennis-wise, I felt I was too defensive in the first set.

Two-time champion Halep has yet to drop a set in this year’s tournament after seeing off unseeded opponent Zheng 6-0 6-4.

Halep took nine games in a row at the start of the match.

But, like in her opening-round win over Sara Sorribes Tormo, she had to hold off a late surge from her opponent to advance.

Fifth seed Aryna Sabalenka safely advanced earlier in the day thanks to a 6-3 6-3 win against Daria Kasatkina, while Sakkari beat Anett Kontaveit 6-3 6-1.

Sabalenka was on course to face Victoria Azarenka for a place in the quarter-finals, but the Belarussian withdrew from her match with Jessica Pegula because of a back injury.

Elsewhere, Jennifer Brady, who knocked out fellow American Venus Williams in the first round, eased past Jelena Ostapenko 6-2 6-1.

Brady faces a tricky test in the next round with Anastasia Pavlyuchenkova, who defeated sixth seed Karolina Pliskova 6-0 7-5, seeking another scalp.

In the meantime, Manchester United’s 2020/2021 English Premier League (EPL) clash against Liverpool on Sunday was called off after their fans broke into Old Trafford and invaded the pitch during a protest.

The protest was against the Glazer family, who are the club’s owners.

The Red Devils were among 12 clubs which last month signed up for the breakaway European Super League (ESL), which collapsed within 48 hours due to huge, unrelenting pressure.

Those plans brought anger against the Glazer family to a new level, with fans congregating at Old Trafford to demand change ahead of Sunday’s clash with rivals Liverpool.

But hundreds of supporters got into the stadium and on to the pitch, leading to an initial unspecified delay to the 4.30 pm (1530 GMT) kick-off.

The Premier League said that “the safety of everyone at Old Trafford is paramount” and confirmation came through from Manchester United at 5.35 pm that the match had been postponed.

“Following discussion between the Police, the Premier League, Trafford Council and the clubs, our match against Liverpool has been postponed due to safety and security considerations around the protest today,” a club statement read.

“Discussions will now take place with the Premier League on a revised date for the fixture.

“Our fans are passionate about Manchester United, and we completely acknowledge the right to free expression and peaceful protest.

“However, we regret the disruption to the team and actions which put other fans, staff, and the police in danger.

“We thank the police for their support and will assist them in any subsequent investigations.”

The Premier League confirmed the collective decision to call off the game was taken with security and safety in mind.

“We understand and respect the strength of feeling but condemn all acts of violence, criminal damage and trespass, especially given the associated COVID-19 breaches,” a statement from the league said.

“Fans have many channels by which to make their views known, but the actions of a minority seen today (Sunday) have no justification.

“We sympathise with the police and stewards who had to deal with a dangerous situation that should have no place in football. The rearrangement of the fixture will be communicated in due course.”

Liverpool —- another founding member of the Super League —- said they were in “full agreement with the decision to postpone” Sunday’s match at Old Trafford.

“It is our position that public safety must be the number one factor in any such decision, with the ability to provide a secure environment for the participants, staff and officials being a particular priority,” the Anfield club said.

“It was clearly not possible for this to be guaranteed today due to a situation which escalated rapidly.”