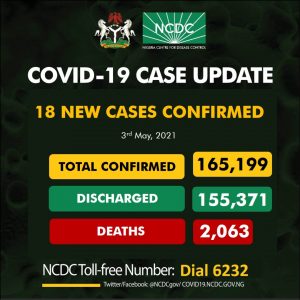 Nigeria Centre for Disease Control (NCDC) has recorded 18 new coronavirus infections, with zero COVID-19 related death in four states and the Federal Capital Territory (FCT) as of May 3.

The NCDC disclosed this on its official Twitter handle on Monday.

The agency said that with the new 18 cases, the tally of confirmed COVID-19 infections in the country jumped to 165,199.

It noted that Lagos State led with eight new cases, followed by the FCT with six cases, Edo; two cases, while Rivers and Ogun had one case each.

The agency said that the country’s active cases stood at 7,757 in the past 24 hours.

It stated that 10 people were successfully treated and had recovered from the virus and discharged from various isolation centres across the country in the past 24 hours.

The centre added that “our discharges today include two community recoveries in FCT, managed in line with standard guidelines.”

In a related development,  Italy has started to vaccinate members of its national football team against COVIDCOVID-19 ahead of Euro 2020 this summer.

The country’s authorities will also ensure their 2020 Olympic athletes are vaccinated before heading to the Tokyo Games.

The football federation (FIGC) said on Monday that the government had approved the vaccinations for the Azzurri players given the relevance of the European Championships.

Players can receive their jab either at an institute for infectious illnesses in Rome or at a university hospital in Milan.

Roberto Mancini’s team face a tough schedule with a five-day training camp planned immediately after the conclusion of Serie A on May 23.

Rome hosts the opening game of Euro 2020, which was delayed 12 months by the coronavirus pandemic, on June 11 when Italy meet Turkey in front of around 16,000 fans.

Italy will also soon offer vaccinations to its Olympic team according to Francesco Figliuolo, the extraordinary commissar for the coronavirus emergency at the opening of a vaccination centre in Rome.

This should be a symbol of the new start in Italy post-pandemic.