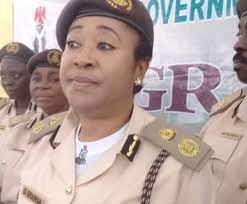 Mrs Doris Braimah, the Assistant Controller–General ( ACG), Nigerian Immigration Service, Zone “A”  Lagos, Mrs Doris Braimah on Monday gave the assurance that the service would make the nation’s borders tighter and impregnable by miscreants trying to damage the country’s image.

She said this at a launch the service held to mark the 2021 Workers Day and fete newsmen for their contribution to nation-building especially through collaboration with NIS.

According to Braimah, with the recent creation of four additional formations by Controller-General, NIS, Mohammed Babandede, the on-going 24- hour border patrol by the service nationwide will be strengthened.

“NIS in order to enhance its services and penetrate inner parts of the country has added four new border formations.

“The commands are: Idiroko border Lagos – state, which is placed under the Zone; Ilela  Border in Sokoto State; Ofutop Border in Cross River; and Jibia Border in Kastina,” she said.

She emphasised that the service was effectively patrolling all the borders in the country.

“The intensive patrol embarked upon by the service is to block the borders being porous to strangers.”

According to the ACG, the Seme and Airport commands patrol and monitoring are also intensive.

“I want to specially commend the controllers of Seme and Airport Commands for absolute diligence,” she said.

The ACG further said that NIS was working hard to clear Passport arrears.

The newsmen report that applicants for Passports who wanted to travel outside the country had difficulties accessing international Passport.

“However, the NIS CG, was able to address the challenge and promised to clear the backlogs as soon as possible,” she hinted.

On The special event for newsmen, she said, “Journalism is a profession that must be revered.

“On behalf of the Controller–General (CG) of NIS,  Mohammed Babandede, NIS celebrates newsmen, who write about NIS, especially this Zone, for their in-depth reportage.

“Zone A, Ikeja-Lagos, celebrates our writers as 2021 workers’ day has been marked,” she said .

The Controller, Seaport Command, Lagos,  Mr Ayodele Arogundade, commended the ACG for deeming it fit to celebrate writers, describing the gesture is the first of its kind.

In another development, the Federal Government has approved the extension of the deadline National Identification Number (NIN) and Subscriber Identity Module (SIM) integration exercise untill  June 30.

The extension, the federal government said, was as a result of the virtual meeting chaired by the Minister of Communications and Digital Economy, Dr Isa Pantami and attended by following officials- Chairman of NCC, Prof Adeolu Akande.

Others are the Executive Vice Chairman of NCC, Prof Umar Garba Dambatta and the Director-General of the National Identity Management Commission (NIMC), Aliyu Azeez.

The minister said the postponement of the deadline was also based on the request by stakeholders for an extension untill  June 30 in order to make it easier for  all citizens and legal residents to register.

“Significant progress has been made in the NIN-SIM verification process.

” For example, almost 54 Million people have obtained their NIN and this can translate to up to 190 Million mobile numbers, since empirical evidence suggests that each unique NIN maps to three to four phone lines,” Pantami said.

The government said the much awaited Android enrolment system is now ready for deployment and this had the potential to significantly accelerate the speed and ease of enrolment.

” Furthermore, the telecom providers and other enrolment agents have also opened several centres across the country to make it easier for eligible citizens and residents to obtain and link their NINs.

” This is similar to the use of Social Security Number and National Insurance Number for accessing services in the United States of America and the United Kingdom respectively,” the federal government said.

Pantami appreciated Nigerians for their patience and compliance with the Federal Government’s directive on the NIN-SIM registration exercise.

He reiterated government’s commitment to continually taking decisions aimed at easing the pains of the citizens with regard to issues related to NIN and SIM registration.

The newsmen report that on Dec. 15, 2020, the federal government declared that after Dec. 30, 2020, all SIMs that were not registered with valid NINs on the network of telecommunications companies would be blocked.The federal government later extended the December 30, 2020 deadline following widespread opposition against the earlier announcement and gave three weeks’ extension for subscribers with NIN from Dec. 30, 2020 to Jan. 19, 2021.

Newsmen report that the federal government later gave six weeks’ extension for subscribers without NIN from Dec. 30, 2020 to Feb. 9, 2021 and further issued an eight weeks extension on Feb. 2, 2021.