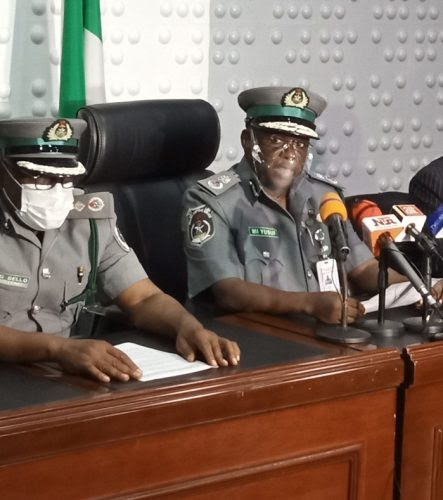 The Area Controller of the command, Comptroller Ibrahim Yusuf, at a media briefing, also noted that the figures showed an increase of N25, 585, 561, 139.92 compared to the collection of the same month in the year 2020.

“This indicates a 64 percentage increase in collection, and an unprecedented record that has never been achieved in the history of Apapa Area Command,” he said.

Yusuf said as regards anti-smuggling, the command intercepted tramadol and unprocessed wood and scrap copper wire with a Duty Paid Value of N1, 760, 506 363 in the month under review.

He pointed out that the items were seized at the AP Moller Terminal and SIFAX 3 bonded terminal in Lagos.

“In line with the provision of extant laws, trade guidelines and enforcement of government fiscal policy measures, the command was able to further strengthen its anti-smuggling operations against economic saboteurs through credible intelligence driven operations.

“This led to the seizure of 4×40 feet containers laden with unregistered pharmaceuticals (674 cartons of tramadol tablets in 225mg and 120mg and 805 cartons of codeine syrup in 100ml) at APMT and SIFAX 3 bonded terminal respectively.

“Other items seized in the period under review include: two containers of unprocessed wood and one container of scrap copper wire,” he said.

He added that these importations contravened Sections 46 and 47 of Customs and Excise Management Act, CAP C 45 LFN 2004 and schedule 6 (items 4 and 6) of the Common External Tariff (CET).

Yusuf noted that these dangerous drugs posed serious threat to health of the citizenry and the economic well-being of the country.

He added that the command was poised to tackle the menace head-on.

“These unprecedented achievements were made possible because of our officers’ resilience and tireless commitment to their duties.

“Nonetheless, we have taken bold initiatives and steps to ensure the collection of appropriate revenue by creating an enabling environment for legitimate businesses to thrive,” he said.